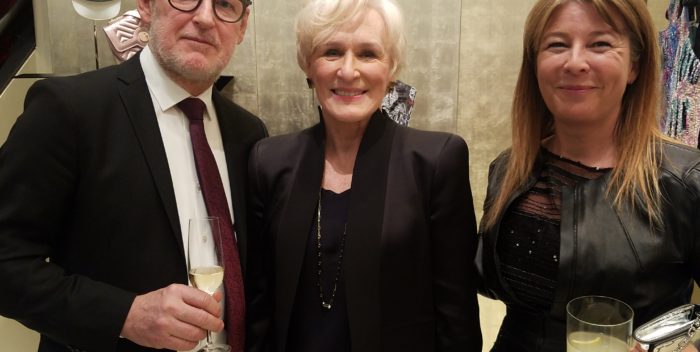 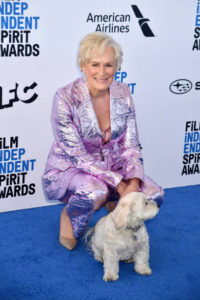 First the estimable Ms. Close won the Indie Spirit Award in Santa Monica for her movie “The Wife” as Best Actress. She brought her dog, Pippy.

Then she changed into a black pants suit and headed to Rodeo Drive in Beverly Hills for an A list salute at the Armani boutique. Pippy was remanded to handlers, but daughter Annie Starke– who plays Glenn as a young woman in “The Wife”– came with her mom.

Samuel L. Jackson, Mary Kay Place and loads of celebs packed the elegant store for a toast to Glenn– who we think will win the Oscar tonight. We can only hope.

Will Pippy be coming to the Oscars? “She couldn’t get a credential,” wise cracked Glenn’s publicist of 38 years, the always stylish Catherine Olim. Catherine and I reminisced about a cover story I assigned on Glenn in 1989 (we were in grade school!). The great novelist Mary Gordon (“Final Payments”) did the piece. Annie was a toddler. The story was such a hit that Glenn, ever the lady, wrote me a thank you note!

(The only other personal notes I ever got after interviews were from Meryl Streep, Barbara Bel Geddes, and Tom Selleck. And one more from Barbara Walters, but that’s another story.)

Annie told us a hilarious story later about how Pippy traveled to Europe when Glenn shot “The Wife.” Annie said, “He went on a separate plane with other Hollywood pets. He met a parrot on the way over!”

Someone asked how Glenn, who has never been known for doing a lot of press, has held up the last few days pre-Oscar. “She hates it,” Annie said, “but she’s doing it1.” And probably sending thank you notes!