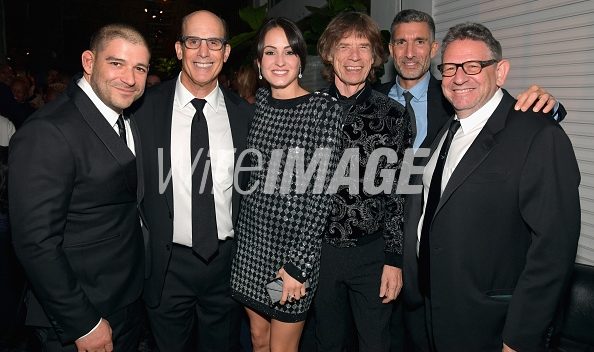 The parties rolled out after the Grammys were over, but it was all about Universal Music Group. They scored the biggest ‘get’ as Sir Lucian Grainge– whose company picked up Album of the Year with Kacey Mugraves’ “Golden Hour”– welcomed legacy superstars like Mick Jagger, Tony Bennett, and Earth Wind & Fire.

Mick and girlfriend Melanie Hamrick were surprise guests at the Universal party space, which was jammed with music industry types and performers including Alessia Cara, Hailee Steinfeld, and Motown  founder Berry Gordy, as well as Bonny Rice, son of the late great R&B star Sir Mack Rice of Falcons fame (his dad wrote “Mustang Sally”). Quincy Jones held court insider, and Sam Moore celebrated his Lifetime Achievement Award on the red carpet– despite the bitter cold. (Is this really California?)

I  talked to Mick for a couple of minutes over the din of gossip and a live DJ. I asked him about new music, particularly a solo record after he dropped a couple of new tracks last year on iTunes. He shook his head and told me: “I can’t do that right now. We’re working on a new Rolling Stones album. I have meetings about it this week.” He made a motion to indicate he was writing songs.

Well, that’s news since the last Stones album, “Blue and Lonesome,” was a big hit. If they’re talking now, we should have a new album for the fall, maybe by Grammy deadline.

Over at Republic Records’ party the crowd partied on and they’re also part of Universal Music. This is where the great Stevie Wonder landed, as well as basketball great Scottie Pippen, actress Sophie Turner and pop star Joe Jonas, singer-songwriter Julia Michaels, lots of newcomers including model Maya Henry.

But the highlight of Republic’s party was the appearance of Paris Jackson, looking swell, and having a great time. I talked to her briefly, and just as I thought, she’s a very smart and together young lady. She traveled with a posse of pals, all of whom looked like they were good friends out for a fun night.