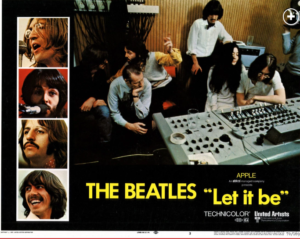 Buried at the end of a press release this morning is excellent news: Michael Lindsay-Hogg is restoring “Let it Be,” the Beatles’ infamously semi-released final film, for its 50th anniversary in 2020. “Let it Be” was first released briefly in May 1970 and then vanished as the Beatles broke up. It’s been the subject of heated discussion for decades: what happened to it?

At the same time, Apple Records really announced this morning that they’ve turned the outtakes over to “Lord of the Rings” director Peter Jackson to make a documentary about the making of the rooftop concert. I’ve inverted the importance of these two headlines from the press release. News of the restored actual film was a footnote to the Jackson news.

Well, all of this is good news. It’s actually quite interesting because “Let it Be” is said to show the band as it was falling apart. Paul McCartney himself has said he doesn’t come off well in it. So to counter that, very cleverly, we’ll get a pro-band film.

One of the issues at the time of “Let it Be” was that Yoko Ono, long before she became a beacon for peace and wise sayings on Twitter, was a controversial figure in the studio. Lennon had there as almost a fifth member of the group. When she appeared in the video for the song “Let it Be” shown for the first time on the Ed Sullivan Show, fans freaked out about this looming figure in the background.

Jackson’s quote in the press release is a clear indication that history will look brighter and shinier. He says: “I was relieved to discover the reality is very different to the myth,” Jackson said. “After reviewing all the footage and audio that Michael Lindsay-Hogg shot 18 months before they broke up, it’s simply an amazing historical treasure trove. Sure, there’s moments of drama, but none of the discord this project has long been associated with. Watching John, Paul, George and Ringo work together, creating now-classic songs from scratch, is not only fascinating. it’s funny, uplifting and surprisingly intimate. … I’m thrilled and honored to have been entrusted with this remarkable footage. Making the movie will be a sheer joy.”

Here’s another interesting twist: yesterday the New York Post had a really great piece by Michael Starr, who interviewed Lindsay Hogg about the film but didn’t mention any of this other stuff. Coincidence? Are there any?

Of course, none of this addresses the next Beatles 50th project, “Abbey Road.” Apple is just coming off the very successful “White Album” anniversary. It’s been a big hit, just like “Sgt. Pepper” was the year before. “Abbey Road” was released on September 26, 1969. It continues to be a best seller for the Beatles, topping this past year’s Vinyl Record sales. Unlike “Sgt. Pepper” and the “White Album,” “Abbey Road” was recorded at much higher level of technology in the first place. McCartney has been reluctant to remix it. A remastered version from 2009 is now the CD of record. But The Beatles won’t miss the anniversary this fall. We can expect some kind of commemoration.

All of this lands on the shoulders of Giles Martin, son of the late Beatles producer George Martin. I guess he just sleeps and eats in the studio at Abbey Road until this is all over!