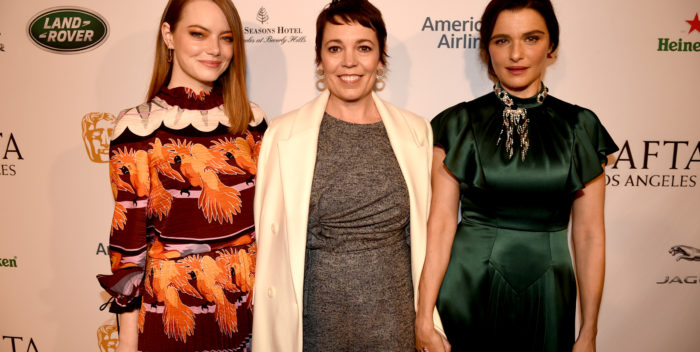 The Golden Globes are over, but the party that wins for the most celebrity well attended and the most enjoyable as the BAFTA tea party at the Four Seasons in Beverly Hills.

Always a highlight of awards season, this laid back soiree had a truly comfortable air about it. The celebs fan-boy and -girl each other, and thankfully no selfies are allowed. BAFTA’s esteemed CEO Chantal Rickards would have it no other way. Some musings were Sacha Baron Cohen declaring his unabashed love for “Roma” director Alfonso Cuaron who returned the compliment to him. Amy Adams and Emily Blunt high fived each other in the hotel foyer. Keegan Michael Key with his producer wife Elisa Pugliesi deep in conversation with “Vice” director Adam McKay. Diane Warren –a nine time Oscar nominee songwriter (she will deservedly receive her 10th nomination for “I’ll Fight” from the heralded documentary, “RBG”)– being shown huge music love from “Shallow” writers Mark Ronson and Anthony Rossomando. “Vice” and “Beale Street” composer Nicholas Britell and Mary Poppins” composer Marc Shaiman were also accepting kudos.

Netflix’s Ted Sarandos, being the class act he is, gave Amazon competitor “Marvelous Mrs. Maisel’s” Rachel Brosnahan accolades. The wrapped up shortbreads at the exit of the party with BAFTA emblazoned on them prompted Emma Stone, leaving with her “Favourite” costars Rachel Weisz and Joe Alwyn (alas gal pal Taylor Swift did not accompany him) to grab a bunch and say, “we’ve got cookies! I’m going to eat these later, no now!”

Earlier Emma, along with her co-stars Rachel Weisz and Olivia Coleman, all banded together and held hands on the red carpet. Two prominent New Yorkers graced the scene as well. Movie publicist Peggy Siegal letting “A Quiet Place” and “Free Solo’s” talented composer Marco Beltrami know what a fan she was of his work.

On the other side of the foyer, New York based power publicist Norah Lawlor was laughing with “Beale Street’s” Regina King while standing on the line for the bar. King wound up order two flutes of sparkling rose for herself and her pal Kathryn Hahn. Unfailingly gracious Patricia Arquette brought her lookalike daughter 15 year old Harlow Jane, along with her boyfriend artist Eric White.