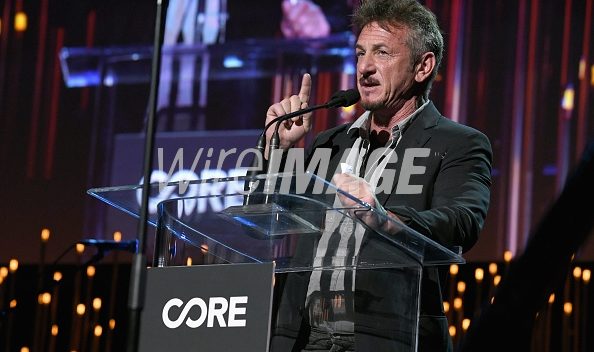 Larry David will not be hosting the Oscars. “No one asked me anyway,” he told me last night at Sean Penn’s annual Haiti fundraiser dinner and concert at the Wiltern Theater in Los Angeles.

Larry said, “I’ll give you my Sherman quote,” referring to the late great Civil War general William Tecumseh Sherman.  “If nominated, I will not run; if elected, I will not serve.”

No one I ran into at Penn’s renamed CORE Gala (which used to be called J/P HRO) wanted to host the Oscars– not Mike Myers, not Keegan Michael Key, not Jimmy Kimmel, who did it for two years in a row. “I think it was unusual they had me two years,” said Kimmel, who was busy talking to Michigan Senator Debbie Stabenow.

There were plenty of Hollywood types and government stars mixing and mingling, all waiting to hear Cat Stevens aka Yusuf, who was the secret performer scheduled for the night. Jamie Foxx was the evening’s emcee, and in the room were Mark Burnett and Roma Downey, Connie Britton, Allison Williams, Julia Roberts, Casey Affleck, Ben Stiller, Sara Gilbert, Linda Perry, Sarah Silverman, Michelle Yeoh, Rainn Wilson, as well as Maxine Waters, Ted Lieu, Tulsi Gabbard, and Eric Swalwell, Stacey Sher and Kerry Brown — plus of course CAA’s Bryan Lourd, who’s been steering CORE with Sean for 9 years.

Macy Gray also performed, and Sean’s son and daughter, Hopper and Dylan, helped celebrate their dad’s success.Unlike in past years, there was no sign of Madonna, or Pam Anderson, and none of Leonardo DiCaprio.

It was an impressive gathering– and equally impressive is that Sean’s commitment to Haiti remains unflagging some 9 years after the devastating earthquake reduced the country to rubble. Penn, however, probably doesn’t want to host the Oscars either.