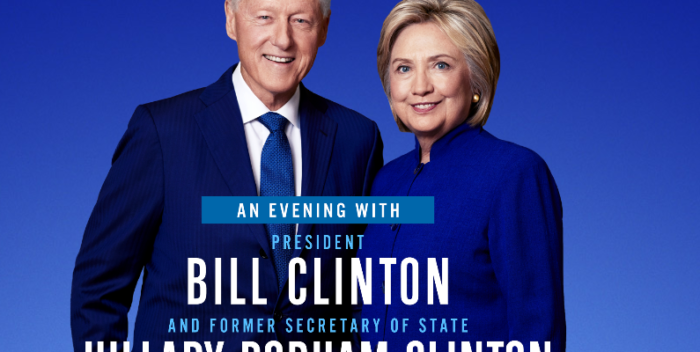 Tuesday, December 4th, the nice before President George H.W. Bush’s funeral in Washington DC– you can still get tickets to see Bill & Hillary Clinton in concert in Sugarland, Texas.

There are hundreds of tickets still available according to Ticketmaster. They range down to $29.50 and up to around $500 for the best seats. I’ll bet the Smart Financial Center will just let people in around 7:30 if demand doesn’t grow in the next 24 hours.

Bill & Hill will sing selections from the country songbook including “Stand By Your Man,” “D-I-V-O-R-C-E” and “Feeling Single, Seeing Double.” Paula Jones and the Little Rock Cowboys are set to open.

This is the Clintons’ last show in 2018. They return next April to the Beacon Theater in New York City where their tour will resume. There are plenty of tickets available for those shows, too.

I like the Clintons but what the heck is going on? They have amassed a war chest. They could tour the US giving talks to small groups, and pressing the flesh for the 2020 charge against Trump. It’s time show a little generosity.

PS I did read some stories about the Clinton Foundation not doing well with donations in 2017. Ignore these stories. The Foundation dialed down activities during Hillary’s presidential campaign. The Clinton Global Initiative was shelved. Don’t worry– they’re doing just fine!