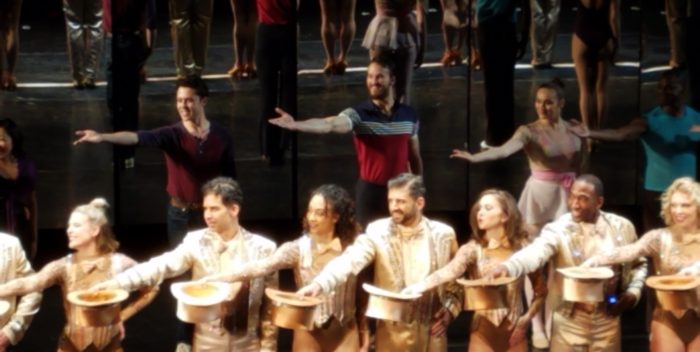 Can you even get a ticket to see “A Chorus Line” at City Center? Last night kicked off a week of performances of the full show in a magnificent revival directed by Bob Avian and starring a cast that rehearsed for three weeks and caught lightning in a bottle.

“A Chorus Line” was last revived in 2007. Somehow, now, it’s better than ever. You only realize now what geniuses Michael Bennett, Ed Kleban, and especially Marvin Hamlisch were. Every song is a gift. The dancing is like a dream. It’s a perfect show that holds up so, so well. (Oh yes, they changed one cultural reference– from Lana Turner to Tina Turner.)

So this cast was just great. Tony Yazbeck. Broadway’s secret weapon who should be the star of some big TV show already, leads them Zack, the choreographer. Yazbeck, a Tony and a Tony winner — for “On the Town”–is like a modern Gene Kelly. Damien Chazelle, this is your next star. This cast is otherwise bursting with talent: Kate Bailey, J.Elaine Marcos, Robin Hurder (we’ll see her next fall in “Moulin Rouge”), Tommy Bacco, Denis Lambert, Anthony Wayne, Jay Armstrong Johnson, Ahmad Simmons– we’ll see him as Ben Vereen in Tom Kail’s FX series on Bob Fosse– the whole cast — sensational.

Who knew City Center was 75 years old? They had a $75 million renovation in 2010, and the joint– a Moorish style theater– continues to resonate with their Encores musicals, and Manhattan Theater Club productions. Cate Blanchett has performed there twice recently. City Center has energy uniquely its own, and somehow translates to the productions. Really, “A Chorus Line”– set to play just 6 more shows through Sunday– could just sit down and stay. Bravo!

This was the ticket in town last night– culminating in a swinging, triumphal dinner at the Plaza Hotel Ballroom. Two million was raised for City Center, not counting the tickets you’re going to try and buy this morning!