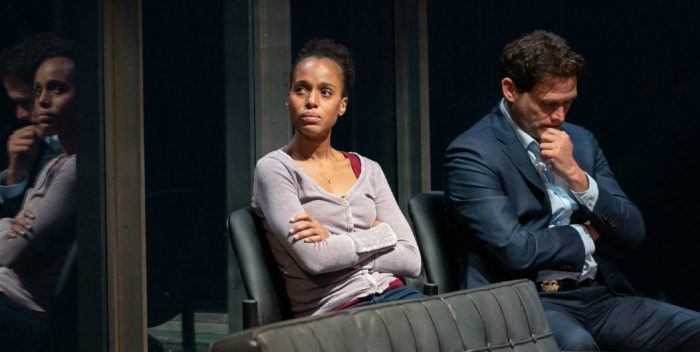 Kerry Washington is back on Broadway several years after her debut in David Mamet’s “Race.”

She returns as a major TV star from “Scandal,” but let’s not forget she’s already paid her dues and knows live theater. Her performance in “American Son” is non stop, ninety minutes of intense, fearsome rage for a teenage son who’s gone missing.

Kenny Leon directs Kerry, Steven Pasquale, Jeremy Jordan and Eugene Lee in this taut drama where you can guess the ending but don’t want to believe it. Kendra (Kerry)’s son with Scott (Steven Pasquale)– Jamal — is never seen but he’s at the center of the action. Educated in the best private school, Jamal’s parents (black and white) have counted on him not mixing with the wrong crowd in their native Miami and staying out of trouble. Alas, Jamal has been picked up the police with two friends whom the parents don’t know, and now they fear the worst.

Christopher Demos-Brown’s debut play addresses a lot of issues– empowerment, feminism, but most of all racism and what it’s like to be a black teen in America even if you have a white parent. Sort of a companion to the current movie “The Hate U Give,” this play addresses head on by name other black kids who’ve been shot at or killed by the police (Eric Garner, Philandro Castile and Tamir Rice are cited). Knowing that the police will play as the villain, Demos-Brown gives a veteran Black Police Lieutenant played by Eugene Lee who has some opinions worth hearing out.

At 90 minutes without intermission, “American Son” is slight and a little underdeveloped. Without a big star it would have been sent to off Broadway for development. But it’s timely and important, and the actors invest their all. Plus, you get a great set from Derek McLane, Tony level lighting from Peter Kaczorowski, and impressive rain and lightning. “American Son” just runs until mid January, so see it ASAP. It’s certainly a rich season for new plays. (You can get tickets for all of them at the TKTS booth in Times Square without waiting on line– at the special plays window.)