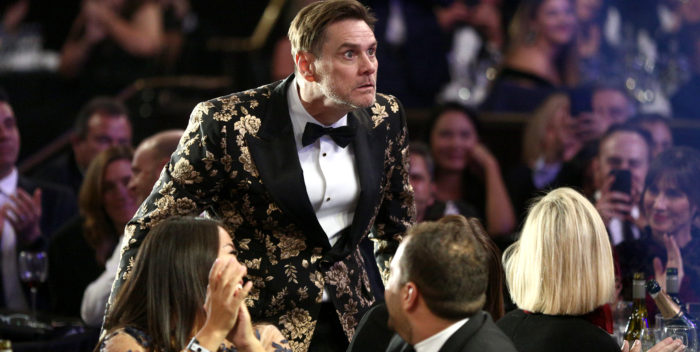 Jim Carrey should be called “Reverend Jim” because he got the the normally low key mostly Brit crowd riled up late last night at the British Academy of Arts & Science’s Britannia Awards at the Beverly Hilton. Politically outspoken Jim being the savvy star he is came fashionably late to the soiree, where he received the Charlie Chaplin award.

Tardiness turned out to be a  part of Jim’s plan.  While skillfully avoiding talking to the press on the line, he still got his picture taken; he knew he was going to hijack the night later on, and that he did.

After being introduced by his “Dumb And Dumber” director Peter Farrelly to a standing ovation, Carrey remarked, “Thank you so much, that was very convincing.”  He went on,  “I approve of the entire illusory manifestation.  I’m glad it didn’t come in the mail.”   When there were groans, he replied, “well it kinda worked, it kinda worked, maybe a little too soon.”

Carrey went on to lambast Trump and his policies. “We need to be clear, shamelessness is not and will never be a superpower.  It is the mark of a villain.  Kidnapping children is not what great nations do.  One half of America at this moment believes there is a sinister deep state diabolically plotting, to what?  Give them healthcare?”  Jim went on to pay homage to Chaplin, referencing his many life struggles. “That kind of pain turns some people, as we’ve seen lately, into monsters.  And others into fountains of creativity.  Without empathy like he had, the character of the Little Tramp would never have existed.  Without empathy, we won’t either. With ‘Modern Times,’ he criticized capitalism without a conscience, and that’s what we have now: capitalism without a conscience.  We are fighting those same evils today.”

Getting back to the beginning of the night, classy  and respected BAFTA-LA CEO Chantal Rickards started the night by saying,  “For one night, lets make America great Britain again.”  Funny Brit comedian host Jack Whitehall  got the night started.  Jack’s cleverest line of the night came later when he introduced Viola Davis who was introducing her ‘Widows’ director Steve McQueen.   “Viola stars in ‘How To Get Away With Murder,’ Saudi Arabia’s most popular show.”

“Game of Thrones” actress Emilia Clarke got the awards started as  received the British Artist of the Year.  She thanked the show’s Creators David Benioff and D. B Weiss for giving her the chance to play Daenerys on the hit show by saying, “I was basically unknown before this.  I catered children’s birthday parties.  Just shows you that you need to be nice to your servants.”

The Stanley Kubrick Britannia Award for Excellence in Film winner Cate Blanchett gave a funny, serious and  all over the place stream of consciousness speech.  Effusively praising Kubrick, “the unapologetic, elastic nature of his imagination I find so inspiring, particularly in these times of reductive simplicity and dangerously locked-down literalism,” Cate  then lightened in up by cheekily calling fellow Aussies, “the convicts that we are.”  She then mocked the Brit’s coldness, “they don’t like to hug.”  Cate went on, “the black, the white, the blue, the red; it’s just like, oh my God, when are we just going to get on with the fact that we’re all different, embrace that difference and move forward?  It’s so boring! We’ve got to acknowledge that we’re all fucked up, and we all need forgiveness. “

Viola Davis then presented McQueen with the John Schlesinger Britannia Award for Excellence in Directing.  She noted.  “He sees all the things in you that everyone else see, things that make you bankable, that make you the type. “  McQueen was ever gracious in his acceptance speech.

Damian Lewis received the Britannia Award for Excellence in Television next. An expert imitator, he did a spot on impersonation of Michael Caine giving him advice as a young actor. “Look straight at the camera and never blink,” Caine advised Lewis.  Lewis took it to heart and then described how every scene he did for years, he didn’t blink before he wised up a bit.

Jon Favreau then gave the last award of the night to Marvel CEO Kevin Feige by praising his, “uncanny eye for picking out those with underappreciated potential.”

Feige ended the night by wisely  saying, “Stories living and breating on big screens was very powerful when I was a kid, and it still is today.  A big, giant screen in a room full of people, that doesn’t get better.”