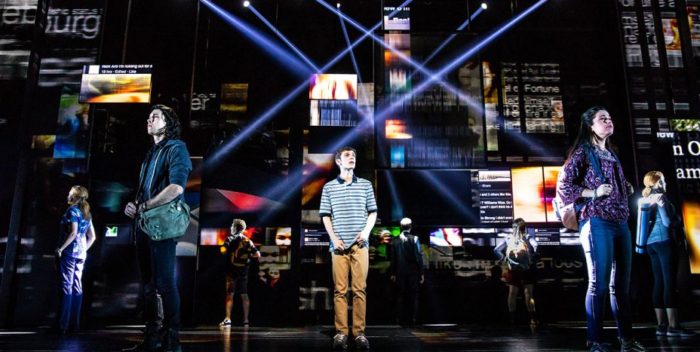 Ben Levi Ross literally tore the hearts out of the audience at the recent Ahmanson opening of the hit Tony Award winning musical “Dear Evan Hansen.”  Katy Perry was sitting near me and kept using tissues because she was crying, along with many others in the packed house. Ben Platt gave it all he got in the role of Evan on Broadway, which garnered him a Tony award and multitude of fans.

With this perfect production the Michael Greif directed, book by Steven Levenson and score by Benj Pasek and Justin Paul, has enthralled LA with its searing portrait of teenage angst in this social media maelstrom we live in. Ben Levi Ross, a 20 year old from Santa Monica CA, will get his own soaring accolades for this superb and soul bearing performance as broken armed Evan.  After being bullied at school with a fractured home life, he sees the chance to be “normal’ with a con he perpetuates at the expense of the suicide of a so called ‘friend.”  The social media part kicks in, and the story has its twists and turns.

The cast is equally as terrific as Levi Rosss.  Jessica Phillips as his mother Heidi, Maggie McKenna as his love interest Zoe, Marrick Smith as the troubled Connor, Phoebe Koyabe as his classmate Alana, Jared Kleinman playing his wisecracking classmate Jared, and Christiane Noll and Aaron Lazar as Connor’s grieving parents, well they are all wonderful.  The creators were all there and besides Katy, Maya Rudolph, Nia Vardalos, Chrissy Metz, Neil Meron and many more celebs and VIPS attended.  In LA, “Dear Evan Hansen” is a  “Hamilton” hot ticket and deservedly so.  Congrats Ben Levi Ross and company to a sublime theatrical experience.