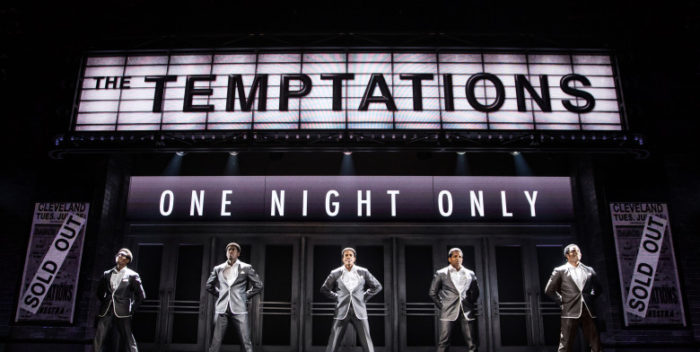 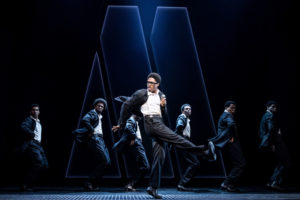 The Temptations, the iconic Motown band, took center stage literally last night at the opening of “Ain’t Too Proud: The Life and Times of The Temptations,” at the Ahmanson Theater in LA. Considered the greatest R & B band of all time, this dazzling, endearing and affecting musical tells the story of the famed band, there have been 24 band members through the years.

The show starts with the original members, all Detroit natives, and their rocky rise to fame. The racism they encountered and the hardships they endured, alcoholism, drugs suicide and illness, all plagued the group. The music and the dancing, etched forever in popular culture, majestically rise above it all. Directed by Des McAnuff and choreographed by Sergio Trujillo who are the same team that did “Jersey Boys.” This show with its depth, humor, pathos and extraordinary talent, equals “Jersey Boys,” in every way, and in most ways, surpasses it.

I spoke with Motown’s founder Berry Gordy, who told me that, that “The Temptations were the original originals. They came up with their own dance steps, their own timeless sound. The singers were all leads, that is so rare. They were all stars. The same can be said for the performers in the show, some of who play multiple roles. Performing the classic hits of the group, “Ball of Confusion,” “Get Ready,” “I Can’t Get Next To You,” “I’m Losing You,” “Papa Was A Rolling Stone,” “Shout,” and more, they are all standouts, all major stars in their own right. Derrick Baskin as Otis Williams, James Harkness as Paul Williams (no relation), Ephraim Sykes as David Ruffin, Nasia Thomas, a memorable Tammi Terrell, Jeremy Pope as Eddie Kendricks, Jawan M. Jackson as Melvin Franklin, Candice Marie Woods and Rashidra Scott as members of the Supremes and more, they are all truly gifted actors and performers.

John Legend walked the carpet with the only surviving member of the original group, Otis Williams, and told me later that, “We all stand on the shoulders of The Temptations.” Standing also was the audience at the end, a rare ten-minute ovation, prompting some of the cast to tears. Baskin then paid homage to the VIPs in the crowd, including Berry Gordy, their manager of many years Shelly Berger, and Mary Wilson of the Supremes, all also got the adoring audience’s love.

“Ain’t Too Proud,” plays at the Ahmanson until September 30th. After that they play in Toronto and then they head to Broadway’s Imperial Theater for a spring opening. By the reaction of the worshiping crowd last night, “Ain’t Too Proud: The Life and Times of the Temptations,” is going to be “Hamilton” huge.