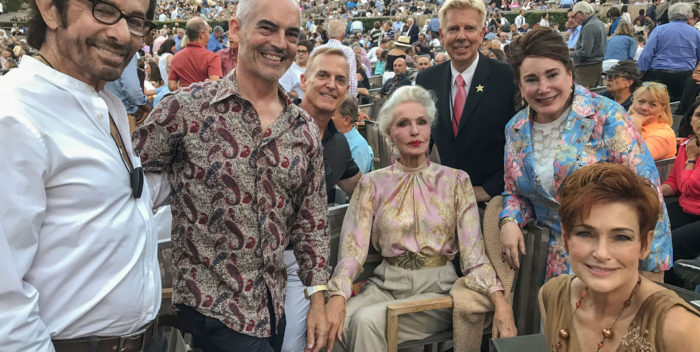 Catwoman herself, the regal Julie Newmar–who turns 85 next week– holding court, and Gustavo Dudamel conducting Rachmaninoff at the Hollywood Bowl:  It doesn’t get better than that. And the woman responsible for bringing Julie there to reign is Donelle Dadigan, long a respected figure in Hollywood.

Tireless Donelle is founder of the Jose Iturbi Foundation, their mission statement is “Popularizing Classical Music…One Note at a Time!” She is also the Founder and CEO of the Hollywood Museum.  Recently, Julie hosted the pre-VIP event at the Bowl to benefit the foundation and classic Hollywood was at out in force.  Besides luminous Julie, others included “General Hospital” star Carolyn Hennessy, the great George Chakiris, “Mrs. Walton” Michael Learned, Alison Arngrim (from “Little House on the Prairie”), the mighty Paul Sorvino, TV beauty (two Emmy noms) Lee Purcell, and  “Mrs. C” — Marion Ross, of “Happy Days” (who was chatting about her book “My Days, Happy and Otherwise.”)

I spoke with the lovely Julie about her still avid fan base and her quest for her elusive star on the Hollywood Walk of Fame.  She told me, “I was a dancer to start with, and I didn’t start acting until I was 24.  I got a Tony award,” she said, throwing this little fact in. In fact, she did get a Tony Award as Best Featured Actress in a Play, in 1959’s “The Marriage-Go-Round.” Her co-stars– are you ready for this?– were legends Charles Boyer and Claudette Colbert.

Seven years later, in 1966, Newmar would find herself a household name, body and face, purring on the hit “Batman” TV show with Adam West, Burt Ward, and the likes of Cesar Romero and Frank Gorshin. They are now all etched in history.

“Catwoman,” she says, “brought in a sizable public and the wonderful thing is that it’s still reverberates and is still being played in movies, TV series and comic books. It amazes me.  It’s a marvelous character.  So, I wish I could dance my way on the Walk of Fame. Maybe two strapping fellows would bring me there!”

She then told me about her upcoming book, a photo biography called “The Nine Lives Of Julie Newmar.”  I asked her about any tidbits she has that she hasn’t talked about yet.  She quipped,  “I’m like my good friend George Hamilton, I keep my lips sealed and say nothing.  You have to imagine it.”

Did she, as rumor had it, have a tryst with the original Batman, Adam West?  She laughed, “No, I did not have an affair with Adam West.  He was a sweetheart and wonderful. He was the best Batman of all.  Maybe it was the times, but he seemed to just get it. “

Any other fun stuff to share I asked her?  “Oh yes.  An Astrologer just told me that I’m going to get married next year.  So lets just look forward to that.”

Then Julie greeted two French friends in perfect French.  She commandeered the room and the Bowl, where fans where thrilled to see her.  The Hollywood Walk of Fame should give this icon, so ahead of her time, her deserved star ASAP.