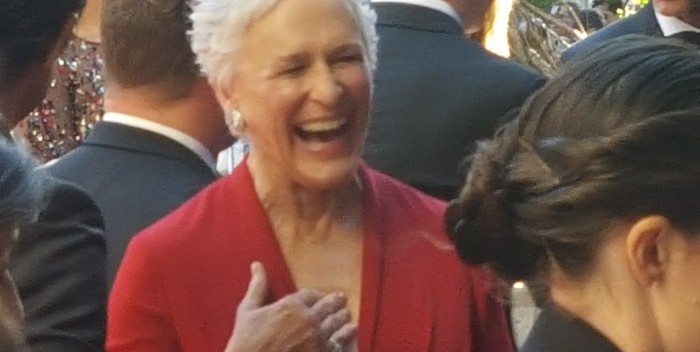 Glenn Close– who should have an Oscar and maybe will get one this time for “The Wife” — is getting another big award first. Glenn will receive the prestigious Lifetime Achievement Award from the Museum of the Moving Image come December 3rd.

“The Wife,” directed by Bjorn Runge, opens next week in New York and Los Angeles, and is sporting a fantastic 95 on Rotten Tomatoes. Jonathan Pryce, Christian Slater, and Max Irons co-star. Based on a novel by Meg Wolitzer, Glenn plays the loyal wife of a writer who win the Pulitzer Prize for Literature. Off to Stockholm they are swept, where Slater– a dogged and charming journalist– is determined to unearth secrets. And he does.

Sony Pictures Classics hosted a swell mid summer soiree at the Monkey Bar last week for all these people. Glenn Close was beaming. She has many Oscar noms, no wins. This one could be it if — if Lady Gaga, Saorise Ronan and few others don’t get in the way. I think this is Close’s year. How much more talented could she be? She’s also opening at the Public Theater in September in Jane Anderson’s “Mother of the Maid” (Anderson wrote the “Wife” screenplay). Fingers are crossed for a Broadway transfer during the winter.

As for the MMI Award, you know they get a lot of pals to come make toasts. So expect Michael Douglas from Glenn’s most famous movie, “Fatal Attraction,” plus great co-star like Janet McTeer, maybe Jeff Bridges, and even some Dalmatians!