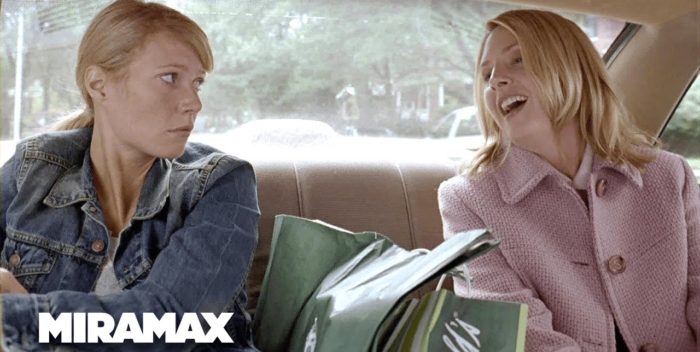 I had a great scoop in 2003, but I didn’t know what it meant. I was there when Gwyneth Paltrow first broke with Harvey Weinstein.

It was a screening for a terrible movie called “Sylvia” about Sylvia Plath, starring Paltrow. She’d won the Oscar four years earlier for “Shakespeare in Love,” and was dubbed the “First Lady of Miramax.” After that film, she made a few more for Miramax and Weinstein. Each was a flop.

“Sylvia” came from Focus Features, part of Universal Pictures, then run by James Schamus. Nevertheless, the premiere was held in the Tribeca Screening Room at 375 Greenwich Avenue, a few floors below Weinstein’s office. He was not present. By coincidence, at the most dramatic moment in the film, a fire alarm went off in the screening room and a strobe light started flashing. No one knew how to turn them off. The movie was totally disrupted. The karma seemed strange at the time.

This is what I wrote:

Paltrow came to prominence at Miramax with the movie “Emma,” won an Oscar for “Shakespeare in Love,” and has starred in several of their features including “The Talented Mr. Ripley,” “Sliding Doors,” “Bounce” and “The Pallbearer.” Insiders say she was paid a small fortune by the company last year to star in the ill-fated comedy “A View From the Top.” She’s currently filming the Broadway hit, “Proof,” for them in London.

But that didn’t stop her from knocking the company in a speech before the 60 invited guests.

“I just want to say that Focus Features is the best place in the world to make movies,” she declared while introducing the film. “They really care about the creative process. And I don’t care what [expletive] building we’re in.”

Paltrow also said that “Sylvia” was the best project she’d ever worked on. With that she said she had to leave for London and miss the after-party at Soho House to appear in front a press junket.

Her comments were not the only disruptive moment during the evening, though. In a kind of karmic message, the fire alarm in the screening room went off twice toward the end of the film just as Plath is preparing to end her life. This entailed not only an alarm sounding, but a strobe light that no one knew how to disable.

After the screening, I asked producer Alison Owen — who is also working on “Proof” — what Paltrow meant by her remarks. I thought perhaps Miramax had passed on “Sylvia” when it was in the development stage.

“You’ll have to ask her, won’t you?” replied the blonde, British producer. Unfortunately, Paltrow was whisking her way across the pond by then.

At the time, Paltrow was filming “Proof” for Miramax based on the hit play. When the film was released in 2005, we thought it was going to be an Oscar contender. Certainly Paltrow would be put forth for Best Actress. The movie was even helmed by John Madden, who guided Gwyneth to an Oscar for “SoL.” But “Proof” was buried, fast, grossing just $7 million. It would be the last of 7 movies Paltrow made for Weinstein.