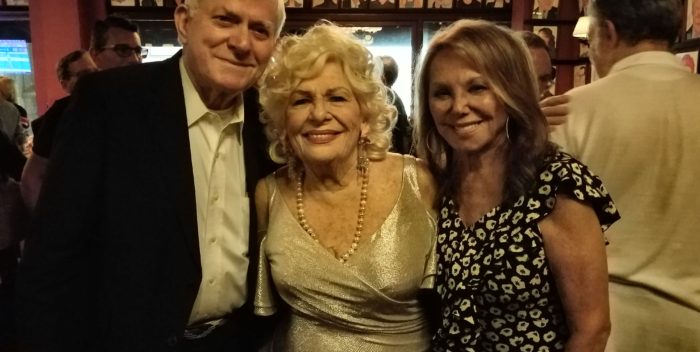 Renee Taylor — you know her in this generation as Sylvia Fine, the mother of Nanny Fine  aka Fran Drescher in “The Nanny.” She ate, crabbed about her weight, and played up a nasal Brooklyn accent. She was hilarious.

But “The Nanny” was only the latest act for an actress and comedian who’s been around a long time– a long time. She was married for 52 years until his death last year to actor-writer-director Joe Bologna. They were one of Hollywood’s favorite couples, renewing their vows every five years. They made movies together and won awards for “Lovers and Other Strangers” and “Made for Each Other,” among others.

Taylor’s career is now display in her one woman at the Theater at St. Clements– six performances a week. She’s 85 years old, so she gets to sit in a comfy chair to tell her story called “My Life on a Diet” which is kind of the funny reverse version of “Heartburn.” Instead of recipes, there are diets, instead of philandering, there’s a long marriage punctuated by some successful attempts to lose weight — even though it is not her natural state. On her honeymoon, Taylor confessed to Bologna that she couldn’t keep up the appearance of being thin–she was already hungry and ready to consume a lot if she became distressed or unhappy.

Her story is the Jewish-actress on the rise in the late 1950s version of Patti Smith’s “Just Kids.” Just as Sam Shepard unexpectedly became a recurring character in that story, in this one it’s Marilyn Monroe and Lee Strasberg. Taylor joined the Actors Workshop around 1960 and became great pals with the pair of now famed thespians, as well as many others. They became recurring motifs in the story of her younger days, right up there with her mother and father, real characters whom I now feel like I know all too well.

Taylor’s saga– it’s so bizarrely funny and rich with detail–is one for the show biz books. By the time her 90 minute spiel is over you get a full picture about an ambitious girl who “had a big appetite” (an observation from her father -in-law) conquered Hollywood. “My Life on a Diet” must be recorded for an audio book– Taylor’s comic timing is as good as Jackie Mason. She can get a joke over the net like Serena Williams on ambush, you’re laughing and don’t realize what happened.

Last night’s opening at St. Clements and then at Sardi’s was full of adoring altercockers many of whom have lived the life alongside Taylor, all legends who are over a certain age and look (and act) like they’re whippersnappers: Elaine May, Marlo Thomas and Phil Donahue, Joyce van Patten, and best of all, Lee Grant, who should be studied by scientists. A nonagenarian, the Oscar winning actress, filmmaker, director is bouncing around like she’s half her age. I’ll have what she’s having!