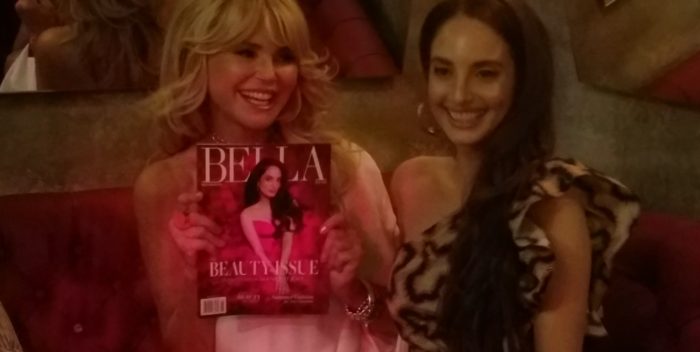 One of the best mother-daughter duos in the world took over La Pulperia restaurant last night on East 57th St.

Christie Brinkley and daughter Alexa Ray Joel literally turned the place over and then some. The occasion was Alexa Ray’s beautiful new cover of Bella Magazine. I’ve never seen so many flash “bulbs” at one time for just two people. It was like the old days of Hollywood glamour!

Alexa is the oldest daughter of famed rock star Billy Joel, but as we know she has the musical chops as well. She’s performed several times at Cafe Carlyle, has sung and recorded with Dad, and has fended off many requests to make an album.

You know, the hardest thing for any talented kid with a famous parent is to carve out their own identity in the same field.

As I’ve said to Alexa many times, “You should write a Broadway musical.” She could do it. Easily. She responded: “I want to star in a Broadway musical!” She could do that, too. Right now she’s planning her wedding. Alexa is happily engaged to Ryan Gleason, owner of hot spots on the Lower East Side. He’s a nice guy. And a lucky one.

And Christie? Alexa also has her mom’s genes, which is a good thing since Ms. Brinkley is 60something and looks 40. Christie told me she’s finally a Downtown Girl (she was Billy’s Uptown Girl), having moved in below Houston Street to a duplex “or a triplex” depending on how you look at it. “I have amazing views,” she said. So do we.

Add into this mix jewelry designer and rock star wife and mama Ann Dexter Jones, who stopped by to support Alexa and her mom. Ann– married, divorced and remarried to Mick Jones of Foreigner– is another NYC dynamo. All of her kids are big successes including rock producer Mark Ronson, designer Samantha Ronson, DJ Charlotte Ronson.