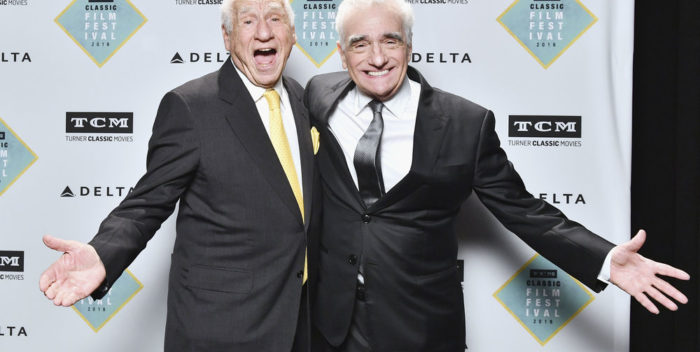 Usually in jaded Hollywood, people get antsy if a premiere doesn’t start on time.  Not last night at the ‘TCM Film Festival Opening Night’ at the TCL Chinese Theatre in Hollywood.  The 50th Anniversary world premiere restoration of Mel Brooks’ “The Producers” was premiering and the The Turner Movie Classic VIP crowd could not have been more appreciative. Martin Scorsese received the inaugural Robert Osborne award.  So for an hour an half before the screening, the adoring audience got to hear the legends that are Marty and Mel.

Host Ben Mankiewicz noted that it’s the 9th film festival and the 24th year the channel has been on the air.  “TCM has become a community of film lovers.”  He then honored longtime host Robert Osborne. “Robert loved this festival. He recognized early the ability to bring movie lovers together to share the magic of Hollywood and cinema from all over the world.  We have established the Robert Osborne award which will be given annually at this festival to a worthy recipient who has worked to keep the classic film flame brightly.”

Martin Scorsese started the Film Foundation in 1990, which has helped to restore 800 films and has educated people around the world about the language and history of cinema, and he never stops advocating for it, in every interview, in every appearance he makes.

“His films have touched millions of people throughout the decades, they are straight from his heart, personal journeys.”  Leo went on, “Marty and I started making movies together nearly 20 years ago starting with “The Gangs of New York.”  Since then over the course of five projects he’s become more than a director to me, he’s been a teacher, collaborator, mentor and my friend.  He gave me an immense appreciation of cinema’s past.   Film is the most integral art form of our time.  He has worked relentlessly to elevate our consciousness about film preservation.  The impact of Marty’s passion and his dedication to cinema is absolutely immeasurable.”

Scorsese pointed out that he shot a scene of “The Aviator” right there in the theater.  He quipped “The Aviator” is one of the very few films of mine they can show on TCM.”  He added,  “I love this festival because it’s devoted to history of cinema.  I really am truly honored to be the recipient of the first award named after Robert Osborne.  Honestly, TCM is played on every TV in my house all the time and it’s on in my editing room with Thelma Schoonmaker.  I won’t stay in a hotel if it doesn’t have TCM.”  Marty then went on talk in a master class style about the issues facing the preservation of film and his distaste for movie review sites. He explained,  “Let the audiences ruminate, they let them decide for themselves.”

Mel Brooks, the 91 year old tornado that he is, followed Marty and started with a serious pronouncement.  “I usually don’t like taking pictures but I love taking pictures with Marty because he’s shorter then me and he makes me look taller.” He added that early in Marty’s career, he would come to him for advice. “The guy had no idea what he was doing, I taught him everything he knows.”

Mel went on to talk about the storied history of “The Producers.” He noted that one of the investors asked him if he would change Hitler to Mussolini, because ‘Mussolini is better liked than Hitler.  Also Gene Wilder was working with my wife Anne Bancroft on “Mother Courage” on Broadway. He was delicious and funny.  But he didn’t get how funny he was. He kept saying, ‘Why are they laughing at me?”   I said “look in the mirror.’  Mel then revealed when he knows something is funny. “I know what’s good.  It rings a bell in my head.  Boom.”

The TCM Classic Film Festival runs through April 29th.  The fest, headed by well-respected GM Jennifer Dorian has become a phenomenon.  Deservedly so.