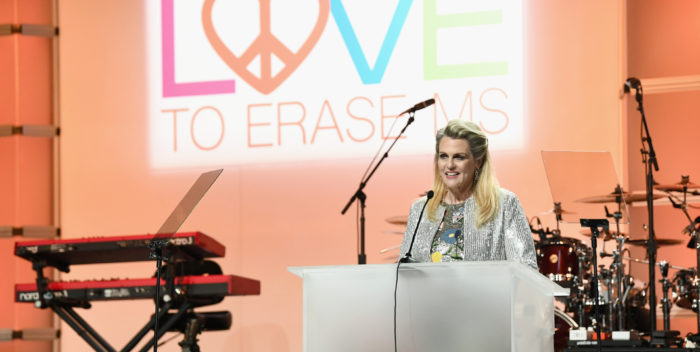 Nancy Davis never stops.  She simply doesn’t.  This tireless MS advocate and Center Without Walls founder told me  at her 25th Anniversary of the “Race to Erase MS” event at the Beverly Hilton that, “twenty five years ago when we started there was no known cause, no cure or drugs on the market.  There was basically no hope. Today there are 15 drugs on the market and an enormous of amount of hope. We are determined to find a cure. The whole landscape of MS has changed.”

I asked if she would ever give up her quest?  “I’ll give up when we find a cure. Not until then.”   Nancy was accompanied by her respected entrepreneur husband Ken Rickel and their twin daughters Mariella and Isabella who are accomplished dancers and were in the fashion show that took place later on.

HQ Trivia game host Scott Rogowsky got the night started.  This is personal for him he told the crowd because his Mom Tobi has MS.  A Milan style “Alice + Olivia fashion” show followed. Then came the music and wow, it was like a slice of Clive Davis’s iconic pre-Grammy party.  Elle King rocked her “Ex’s and Oh’s” and then did a stupendous version of Tom Petty’s  “American Girl.” The lovely Siedah Garret sang the song she co-wrote for Michael Jackson, “Man in the Mirror,” and noted, “this song paid for my house, my car, everything.”  Randy Jackson introduced the rap music superstar Flo Rida, who literally brought down the house with his seven-song set that included his mega hits, “Right Round,” “In The Ayer,” “My House,” and “Wild Ones.”

The live auction included dinner with Ozzy, Sharon, Kelly and Jack at Sharon’s LA home.  The caveat on that?  All guests must complete a background check prior to the big night.  A Ferrari Portofino went for $250,000.   The silent auction included a walk on for “Curb Your Enthusiasm,” which sold for $16,000. Celebs such as Dave Winfield, Johnathon Schaech, Steven McQueen, Anne Heche, Ruby Modine, Byron Allen, Frances Fisher, Natalie Zea, Avril Lavigne, Nile Rodgers, Jack and Kelly Osborne and more all were bidding along with the VIP guests.

Other goings on included Joan Collins who sat with Nikki Haskell and the grande dame of them all Barbara Davis, Nancy’s Mom and one of the most well regarded philanthropists in the world.  Literally everyone in the room wanted to greet the powerhouse that is Barbara.  Indefatigable Nikki told me she was soon off to NY to go the premiere of the film “Studio 54” at Tribeca Film Festival. (The party is at the Museum of Sex, a real place, but it could also have been the nickname of Studio 54 back in the day!)

Aaron Paul told me that although a revival of “Breaking Bad,” is definitely not going to happen, he said that, “we were together the other week for a 10th Year Anniversary shoot for the cover of Entertainment Weekly.”  He then noted maybe he wasn’t supposed to tell me that, but then again  Aaron is one of the nicest and most talented guys in Hollywood.

At midnight, this  25th Anniversary spectacular event raised 1.6 million and was a night to remember. Bravo to Nancy Davis and all those involved in this worthy cause.  She is a genuine warrior.  She and her esteemed family are beacons in Hollywood.