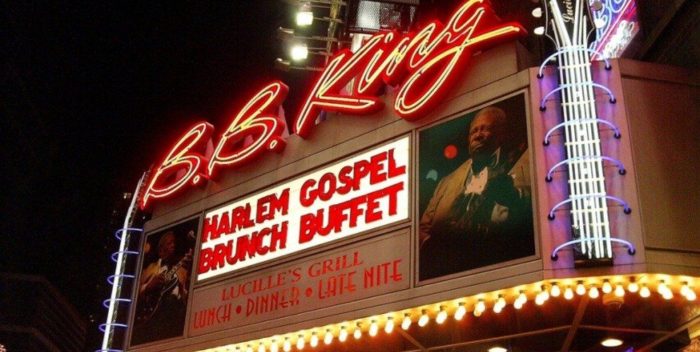 I am really sorry to see that BB King’s in Times Square will close at the end of the month. Isn’t this what the Times Square redevelopment was supposed to be about? Great places to see live music or theater? What will become of this space, which is below ground? Maybe the old Times Square will return, with sex dungeons. And, of course, Sephora.

Years ago– I don’t know when– some promoter convinced Aretha Franklin’s bookers to put her in there. It was much smaller than any place Aretha had played in eons, but the ticket price was high. The show sold out. I asked the publicist to put me at the lip of the stage so that when Aretha– who doesn’t do sound check or rehearsal– stepped out, she’d see a friendly face. Just as I thought, she was introduced, the band was playing, and Aretha came forward, looked down and saw me. She took in the size of the room and said, without missing a beat, “Well, well, we haven’t played a room this small in some time, have we?” The crowd went wild and she gave, of course, a historic show.

In the winter of 2002, Miramax took over BB Kings for the premiere a movie I worked on called “Only the Strong Survive.” It was some night, with performances by Sam Moore, Wilson Pickett, Mary Wilson, Ann Peebles, Carla Thomas, and so on. It was magic. Kurt Vonnegut was in the audience, which was surreal. So was May Pang.

The number of places in Manhattan where you can see classic soul or rock, jazz, or country, cool stuff, hip stuff, where you know musicians will show up to play or hang with their pals has fast dissipated. The Bottom Line is gone. Roseland, RIP. Tramps, too. (CBGB is also gone, but that was a different kind of place.) We still have relatively newer spots like City Winery or the High Line, but the golden era of nightclubs has faded to fuzzy memory.

Losing BB Kings on 42nd Street– that’s bad. The street is full of crap, all chain restaurants you could find in your mall in Omaha. BB Kings was the gem of the block (apart from the two or three Broadway theaters). This is where you went for the Harlem brunch, or Breakfast with the Beatles. Legendary acts that have no place in the world of crap Bieber pop– Dave Mason, Average White Band, Oleta Adams–could shine in this showcase.

But hey, this is DeBlasio’s New York– empty storefronts everywhere, streets choked with traffic from private car services and other impediments, homeless people beyond Ed Koch’s imagination, and a Times Square that looks like the setting for “Mad Max Thunderdome” part 2. You can always go to Brooklyn if you don’t like it!