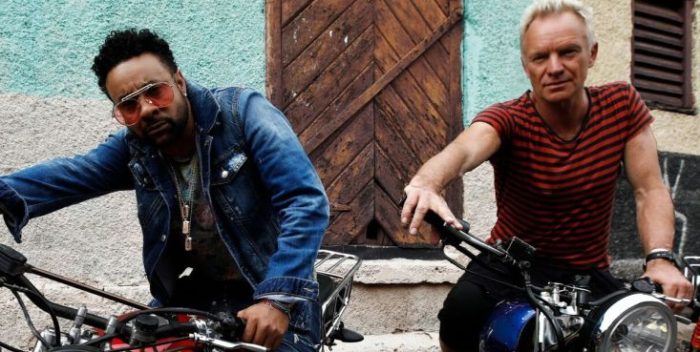 You get a lot when you’re a Sting fan– great rock and reggae, and then a potential private show at the Metropolitan Museum of Art.

Today Sting and reggae star Shaggy release their joint venture, “44/876,” a collection of songs that stick like the best earwigs in your head. I’m in love with one, “Dreaming in the USA,” that could be the DACA theme song. I hope news of it spreads quickly to immigrants everywhere as a clarion call of support. Sting, who has always reached out with a “One World” philosophy gets it — this is the anthem for a movement.

Two of the songs on “44/876have already appeared as singles– the bouncy “Don’t Make Me Wait” and “Morning is Coming” bring out Sting’s best singing with Shaggy’s rhythmic grooves seem effortless but listen to them–the” y’re clever collaborations.

One of the songs on “44/876” is listed as a bonus track. But “If You Can’t Find Love” sounds like such a hit I hope it finds a chart life fast. It’s what we used to call a “perfect single” and as good as anything from Sting’s solo greatest hits. I defy anyone not to fall in love with this song. I’m also in love with a number called “Gotta Get Back My Baby,” a delicious duet that, again, should lodge itself in your head for a long time.

At this point in his career Sting has nothing to prove. At a shocking 66 years old (he looks at least 20 years younger), he just keeps looking for ways to engage his talent. Hooking up with Shaggy is an intriguing idea because Sting’s original music with the Police was so reggae infused. On “44/876” he’s gone to the source– Shaggy is huge in the reggae world, we just knew him once for his pop hit, “It Wasn’t Me.” They make for a cool combo.

And they aren’t fooling around, that’s clear from the title track that opens this set. Shaggy sets the tone, making it abundantly clear that Sting is deferring to the expert. It’s the way Sting has always integrated international music, with a respectful bow. The listener wins because we learn a little while we’re dancing.

Details for “Sting: Atlantic Crossing” are here. One of the perks, besides hearing Sting perform in an intimate setting and seeing the Cole paintings (they are magnificent) is seeing a mini-show of a stunning forthcoming art book pairing by Sting and modern Hudson River-type landscape artist Stephen Hannock called “The Last Ship from the River of the Northern City.”