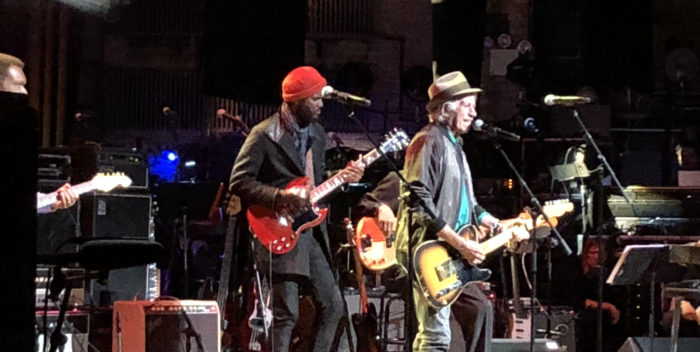 Rolling Stone Keith Richards. age 74, looked fine and dandy Thursday night at the Beacon Theater. He took the stage at Love Rocks 2, the brainchild of John Varvatos and Greg Williamson, and stole the four hour long all-star concert to raise money for Gods Love We Deliver.

Bill Murray, the de facto emcee, joked that the audience was raising money not to feed people in need around New York City, but to keep Keith Richards alive another day. But really, there’s no fear of Richards expiring from the looks of things. He’s in great shape. With Gary Clark Jr.–who soared on guitar despite a cast on a broken wrist–plus Robert Cray, Norah Jones, and backed by Will Lee, Paul Shaffer and a mesmerizing band of heavy hitters, Keef performed his Rolling Stones signature song, “Happy,” and a standout solo track from two decades ago called “Make No Mistake.”

The latter song was performed as a duet with Jones singing, but also with legendary Memphis musicians whose sound Richards used on his original recording — Charles and Leroy Hodges who’d just performed with Robert Cray.

The whole night was one of highs, with ovation after ovation for the likes of Mavis Staples, Donald Fagen, a trio of Emmylou Harris-Lucinda Williams-Norah Jones, Ann Wilson of Heart, Nona Hendryx, Jimmie Vaughn, Trombone Shorty, Valerie Simpson with Anthony Hamilton, Billy Gibbons of ZZ Top with John McEnroe, McEnroe’s rock star wife Patty Smyth, Andra Day, the Bacon Brothers, and so on.

At one point, Murray — who was sent on stage a few times to fund raise– started taking cash from people near the stage. It was surprising how much he got– certainly a couple thousand dollars in what he said were 20s, 50s, and 100 dollar bills. It was hilarious but we’ll see how the charity deals with it. It reminded me of Soupy Sales sending his child viewers to their mother’s pocketbooks.

These charity shows in New York with dozens of acts are often the only way to see real rock, blues, soul, country all come together anymore  in the hands of superstars. This show was no exception, with star and bit players sharing the stage and producing phenomenal, historic moments. Kudos to Varvatos and Williamson.