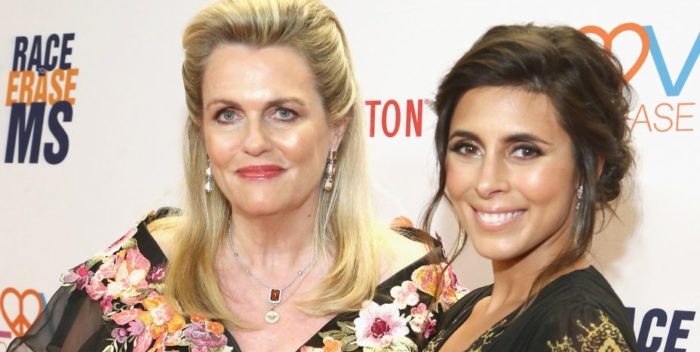 Marvin Davis, now 13 years gone, at one time owned the Beverly Hills Hotel and 20th Century Fox. But his greatest legacies are his beloved widow, Barbara, who chairs the Carousel of Hope Ball every year, and their daughter, Nancy, who is now celebrating 25 years of creating the Race to Erase MS gala. What would Los Angeles (and the world) do without these ladies?

Nancy– passionate, determined, fiery, and funny– came to New York to talk about the 25th anniversary gala set for April 20th at the Beverly Hilton. Every star is coming, not just from Hollywood but from all over the world. When all the Oscars hoopla is over, “Race to Erase” is the hottest ticket in town. Nancy revealed to me that Siedah Garrett, who wrote Michael Jackson’s “Man in the Mirror,” will perform– and more performers will be revealed son. Guests every year include Quincy Jones, Clive Davis, Randy Jackson, the whole Osbourne family, Jamie Lyn Sigler— it’s like the best pages of US Weekly come to life.

“I called him up,” Nancy said over breakfast last week at the Rockefeller Center Cafe, “and said everyone’s obsessed with you. You have to come. We’re going to figure out a game everyone can play at the dinner.”

Listen, Nancy Davis– who has five kids and is happily married– found out at age 33 she had MS. Her doctor told her to go home and go to bed. “He said, At least I’d be able to use the TV remote,” Nancy recalled. “I said, Wait a minute. I’m only 33.”

At the time there were no drugs on the market for multiple sclerosis. None “Zero,” she says, plainly. So she started making calls. Today, thanks to seed money from Race, there are 15 drugs to choose from. A newer one, called Ocrevus (ocrelizumab), approved one year ago, has revolutionized many sufferers’ lives. What used to be a death sentence has now has treatments that work.

“MS is a really popular disease right now because the idea of finding a cure is out there,” Davis says. There’s a light, at least, at the end of the tunnel.

The 25th anniversary ball will not only be star studded, but look for a lot of the attendees to be wearing the Race’s official Invictus Peace and Love watch — a massive hit on Evine and Nancy’s own brainstorm– a great way to contribute to the charity.

But look, this is what we want to know–Didn’t  Aaron Spelling model the “Dynasty” TV show with the Carrington family on the Davises? That’s what we always heard back in the 80s. In fact, when the Davises –who lived in Denver– got wind of this, they moved to Hollywood and took over. Right?

Well, not exactly. “Maybe there was an influence because of my dad’s oil company, but the characters are completely different,” Nancy says. She’s right. Marvin Davis had one wife, the amazing Barbara. There was no Alexis or Krystal. And the family– even with their own legal problems– turned out to be filmmakers (brother John), and incredible philanthropists. The Carringtons would have been lucky to be the Davises!