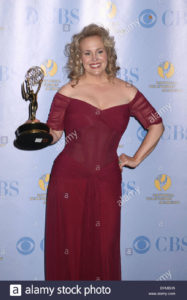 Here we are in the middle of Women’s March Weekend. #TimesUp, started in Hollywood, is quickly encompassing women in all walks of life. Equality — in pay, among other things — is being demanded, quite rightly. A movie is being pitched about the moment the Equal Rights Amendment did not become law.

So you’d think the daytime soap operas, whose audience is largely women, would be a little more sensitive to the subject. But on Friday’s episode of “General Hospital,” Laura Spencer– played by Emmy winner Genie Francis on and off for 40 years — made a surprising announcement. She was leaving. (She might be back in 6 weeks.)

I got of lot notifications about this: Francis has been dropped to what soaps call “recurring.” This is a nice way of saying you might have work if we call you, on short notice, and you’ll be used as a spice, not an ingredient from her on out.

Fans went nuts on Twitter and Facebook. The character, Laura, was once part of “Luke and Laura,” the most famous soap opera couple of all time. Francis, who’s in her 50s, has been on the show she since was a teenager. She has a loyal following of four decades of viewers, mostly women.

But “General Hospital” — like the other three remaining soaps (there used to more than a dozen on the air at the same time) — isn’t about that. It’s not even about youth so much — although all the actors from Francis’s era on the show are now on ‘recurring’ status, meaning they have no rights and are at the mercy of the producer’s and writers’ fancy.

No, what I’m picking up from this is that the show’s budget is tipped toward the male actors, many of whom are scene chewers. One I watched the other day is like a large tree. He barely speaks and his face doesn’t move. But he’s handsome and the young woman can act ‘to’ him if not with him.

Well, that’s soap operas. If you watch the great comedy “SoapDish,” you can get the whole story succinctly. The genre has always been populated by megalomaniac executive producers who misunderstood their audience or neglected them on purpose. And that’s why there are only four soaps left. As for Genie Francis, she’ll be fine. But I’d watch the ratings in coming weeks. Already a sore subject, they may be vulnerable to this sort of thing. The female viewers who remain aren’t stupid– and in the middle of #TimesUp, they may say the same thing. Judge Judy is just a click away.