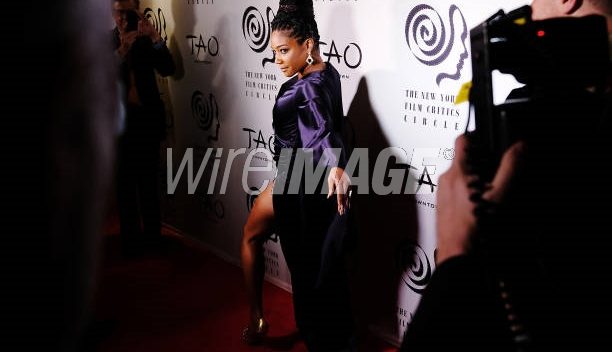 If there’s been a recent breakout star anywhere, it’s comedian Tiffany Haddish. She made a huge splash on “Saturday Night Live” this fall after starring in Malcolm Lee’s “Girls Trip,” which turned out to be a $100 million comedy– a rarity.

Last night Haddish literally stole the New York Film Critics dinner at Tao Downtown, upstaging everything and everyone when she accepted the award for Best Supporting Actress in “Girls Trip.” She was a bold choice since Laurie Metcalf and Allison Janney are in the lead for the Golden Globes and the Academy Awards. Tiffany didn’t even merit a Globe nod.

But this wise, canny, and spicy 37 year old “overnight sensation” took the stage and held forth with a 20 minute performance piece that was alternately hilarious and moving. She labeled the custom drink she was holding throughout the speech her “Tiffanycity-tini.” She said, “It’s delicious. I’ve had two, and I do feel like magic.” I have some excerpts below.

After the show, or rather during the show, Tiffany escaped to the ladies’ room and that’s where she stayed for the rest of the night. When the show was over, I found her back there in the lounge. She stayed longer than any of the winners — Greta Gerwig, Saorise Ronan, Willem Dafoe, etc — and then some. Her long time stylist Dionne was with her, as well as a bunch of friends, and “Get Out” actress Betty Gabriel (a shy beauty).

Tiffany was literally the only one of the NYFCC winners who wasn’t going to the Golden Globes but she took it in stride. “I’ve got to get back on tour!” she declared. “I’m a stand up comedian!”

What does she really want to do? “I want to star in a Japanese soap opera,” she said. Not an American one? “No way! I can speak Japanese!” She demonstrated for us, impressively. Her knowledge, I think, comes from an ex boyfriend. Then there was another ex, British, whom she performed a DNA test on to determine, well, it’s too complicated here…

Tiffany Haddish is the anti-M’Onique, although she did ask, a couple of times, “Does a check come with this?” referring to the award. Later she told me, “I just found out how important this award is. I can’t believe it!”

Attention Academy Awards: if Tiffany Haddish doesn’t get an Oscar nomination, she’d better be a presenter. She’ll get ratings, and we will all be better for it!

She did talk about the crowd in front of her: “So now that I get to meet the critics, first off, thank you, guys. I don’t even—I don’t read reviews. I don’t. The most reviews you’ll see me read is something that either my publicist sends me and says, “Read this,” and I’m like, “You read it,” because if it hurt my feelings I’m going to cuss their ass out in my soul, and then I’m going to pray for them, and I’ll laugh. Because I’m super-sensitive. I don’t mean to be so sensitive, but that’s just who I am. And I’m not afraid to admit it.”

On her childhood in South Central L.A. “When you’re a little kid going through the [foster-care] system, you wonder, “Does anybody even know I’m alive?” To be able to be this example to so many youth—there’s so many people like me that you guys have no clue about. But they coming. Because I kicked the fucking door open.”

ON a raunchy scene that didn’t make “Girls Trip”: “So, there’s a scene where I tell Regina [Hall] all the things I would do for her, that I got her back, no matter what. I’m like, no matter what, I got your back. I’m talking Timberland boots, hot bricks—I don’t care. We’re going to give him some Ambien, night night. And then, when he sleep, we’re going to burn your name in his dick. And then we’re going to put mud and salt on it so it can keloid over, and then it will be ribbed for your pleasure. And then when he wake up, we’ll look him dead in his eyes, and we’ll tell him right to his face to keep your name out these bitches’ mouths.”