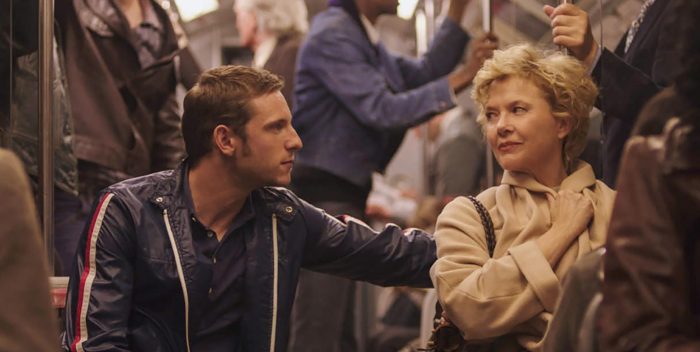 Rooney Mara was the loyal sister in law Monday night, accompanied by her boyfriend Joaquin Phoenix, as she hosted an Academy awards screening of her brother in law Jamie Bell’s ‘Film Stars Don’t Die in Liverpool’ at the London Hotel.

Jamie is married to Kate Mara, the equally talented actress sister of Rooney. Rooney and Joaquin are pretty Hollywood low key, although they are vocal in their support of animal rights (as are Kate and Jamie). I did not ask the Maras about the New York Giants, a painful subject, because it was a night of celebration. (Their family owns the beleaguered football team.)

The quartet was gracious and chatted with guests. Jamie’s co-star —  none other than the luminous Annette Bening —  brought out her own fan club that included Jane Fonda, Diane Lane, Julian Sands, Robert Towne, Francis Fisher and more.

Director Paul McGuigan’s lovely film hits all the poignant right notes in his endearing tale of the real life romance of a the struggling young actor Peter Turner (his memoir is the basis of the film,) and famed actress Gloria Grahame, a legendary Oscar winning star who struggles with illness at the end of her career.  Both actors are wonderfully bittersweet and affecting in their star-crossed lovers roles. Elvis Costello’s song, ‘You Shouldn’t Look at Me That Way,’ is a standout.  No less than Vanessa Redgrave also shines as Gloria’s mother with Julie Walters just lovely as Peter’s Mum.  Sony Picture Classics releases the film on December 29th.