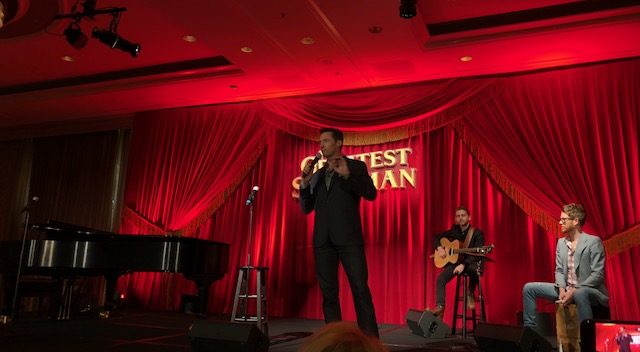 “The Greatest Showman,” has been years in the making but by the splash that included a surprise Hugh Jackman appearance and showing some clips of the musical numbers at an event at the Four Seasons in LA today, the film could turn out to be a circus sized family hit for Fox. Hugh Jackman plays P.T Barnum, with Michelle Williams, Zac Efron, Zendaya, Rebecca Ferguson rounding out the cast.  Jackman compared the making of a musical in Hollywood to climbing Mt. Everest.

“Of all the things you gotta get right, the music is key and so hard to You have to ask an audience, particularly in this case when this is an original movie musical where none of the audience have heard the music or seen it on a Broadway show, it’s not a jukebox musical, or a rehash, it’s brand new. You need them to get in into the story, hear songs for the first time and have those songs stick in their head. It’s a very difficult thing. There are so many great stories in the making of this movie.  One of them is Michael Gracey the first time director my friend from Australia.  The others are Justin Paul and Benj Pasek (who wrote the songs for the film.) ”

Coincidentally the duo was nominated for two Grammy awards this morning, one for “Dear Evan Hansen” and the other for “La La Land.”  Jackman continued, “It is honestly to me one of the greatest joys of my career to collaborate with the both of them.”  Hugh then introduced the duo who brought on the glorious singer/Broadway performer Keala Settle who sang a song that she performs in the film ‘This Is Me.’ Jackman said, “We want everyone from age 5 to 90 to love this.”

‘The Greatest Showman,’ will be released on Dec. 20th.