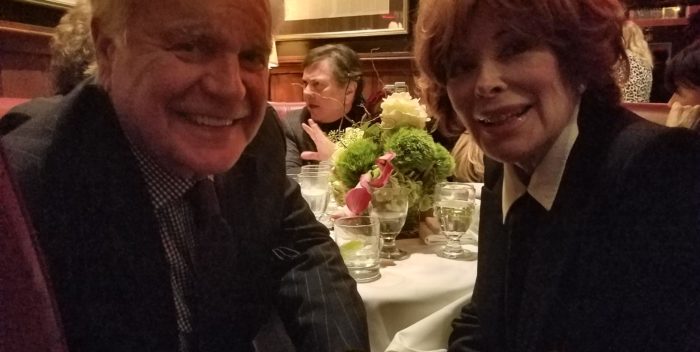 There were a lot of celebrities Tuesday night at the 90th anniversary party for Gallagher’s Steakhouse on West 52nd St. near Broadway. Richard Kind, Tovah Feldshuh, Len Cariou–Broadway types, all beloved types. The famed paparazzi, Ron Galella, mortal enemy of Jackie Onassis but chronicler of celebrities, had a corner booth. I ran into people I hadn’t seen in a long time, it was like a great big reunion.

But without a doubt the stars of the night were Robert Wagner and Jill St. John. They are the epitome of Hollywood cool. She was a Bond and a Batman girl. He was..is… suavecito. I looked it up later. Are you ready? He is 87. She is 77. They look like they’re in their Fifties. I interviewed Bob in the 90s, one of the best pieces I ever did. He remembered. I complimented them and Jill said, “As Oscar Wilde said, Living well is the best revenge.”

We talked about Liz Smith. “I loved her,” Wagner said. “When I heard she passed, I was very sad. She really loved me. She always wrote about me. She interviewed me at the 92nd St. Y when each of my books came out. She was very special.”

We talked about Jill’s five decade fame for appearing in the “Batman” TV pilot in 1966. She reprised the role of Molly, the Riddler’s assistant, in a subsequent episode as well. Four year old boys light up when they see her. They think “Batman” is current. Jill says she has to explain to them that the Riddler, the Joker, and the Penguin are all gone. “A little boy asked me Are they in heaven? I said, No, they were criminals, they’re in hell!” She laughed. (I’m telling you, Jill St. John is still hot.)

“Michael Weatherly’s son loves her,” said Wagner of his friend and “NCIS” co-star (Weatherly now stars in “Bull” on CBS.) “We’re having dinner with them this week, Jill said. Wagner will shoot a new “NCIS” episode before the end of the year.

We talked about his kids with Natalie Wood. “They’re all doing great,” he said. “Natasha is introducing a Natalie perfume on HSN,” he said.

“Listen to what happened. I got a fraud alert on my credit card,” Jill interjects. “I bought two bottles of Natalie to help sales, from HSN. The computer saw I hadn’t shopped there before! I was just trying to help!”

We didn’t get to talk about their famous “Seinfeld” appearance in the legendary “Yada Yada/Anti-Dentite” episode (which also featured Bryan Cranston as Dr. Tim Watley). After countless classic TV shows like “It Takes a Thief” and “Hart to Hart,” Wagner will always have “Seinfeld,”

What brought them to Gallagher’s and cold cold New York from warm Beverly Hills and balmy Aspen? “I came here when I was 12 with my grandparents,” Wagner said. “Then I was here all the time when I was a young actor. Plus Dean Poll, who owns it now, is a good friend.”

“He basically saved it from closing,” said Jill. We reminisced about John Springer, the famed Broadway press agent who repped the place 30 years ago. I told them Aretha Franklin likes the food so much she orders in from her hotel when she’s in town.

They posed for the photo above and went back to their filet mignon. What class acts! All I needed was Stefanie Powers to walk in and we’d be over the top with Hollywood cool!