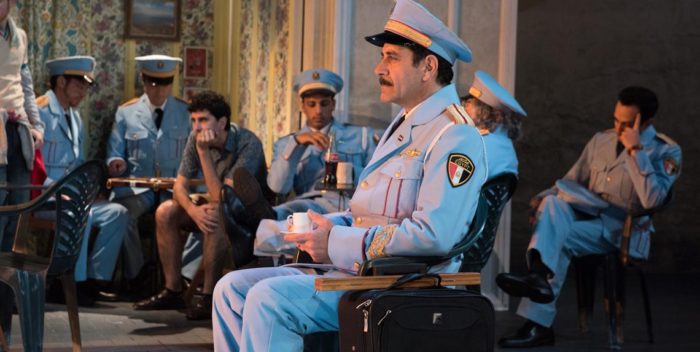 Thursday night was one of those Broadway openings where you go on with buzz and come out floating on air. “The Band’s Visit,” starring Tony Shalhoub and Katrina Lenk– who is a overnight sensation after five tries– is just about perfect. Every reviewer should say so. It’s one of those rare “Hamilton”-sized hits that just grabs you by the heart.

It’s not big and flashy like “Hamilton.” It’s understated and a gem. Based on the 2007 Israeli film, “The Band’s Visit” is about an Egyptian police band invited to an Arab Cultural Center in a small Israeli town. But they take the wrong bus and wind up in the wrong town, a very, very small town, where they encounter the few Israeli residents.

“The Band’s Visit” unfolds, 95 minutes without an intermission. Shalhoub is the captain and conductor of the band. Lenk is Dina, who runs a local bar and restaurant. Over the night all of these people share together you come to care about them all quickly, and they come to care about each other.

The amazing and always innovative David Cromer directs from a book written by Itamar Moses. David Yazbeck wrote the songs, music and lyrics, and they’re so good, so new, so rich that you will want the CD the minute it’s ready. One song in particular, “Answer Me,” at the very end, is a lump in the throat killer without schmaltz, totally original that leaves your head spinning.

Is it perfect? Only Sondheim is perfect, right? And “Hamilton.” Cromer and Yazbeck can’t comprehend it yet. Everything about this show is just right, and its message– hope and love– devoid of cliche, is so needed right now.

The music is provided by “the band”– some members of the cast are actually playing their instruments wit the show’s orchestra augmenting. All the musicians are on the stage, wearing light blue “Sgt Pepper” type uniforms (as Dina calls them), and the effect is mesmerizing.

Among the producers, just so you know: my old friend, Fred Zollo, another old pal, John Hart, and Marc Platt. This has been Marc Platt’s year, kids– “La La Land, “Dear Evan Hansen,”– starring his son Ben– and now this. This is a guy with very good taste indeed!

Get tickets to this show today, while you can. No kidding !