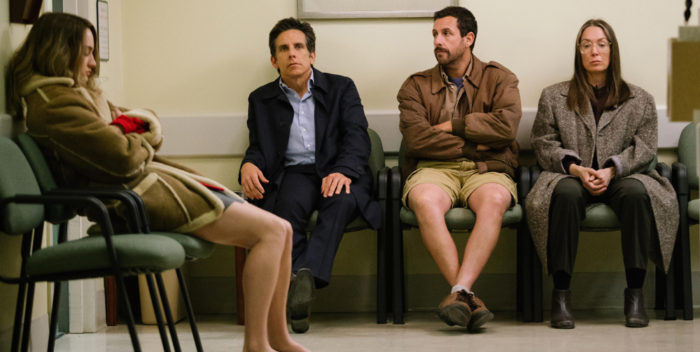 Woody Allen often complains that no filmmakers are influenced by him. But Noah Baumach– who’s written and/or directed several wonderful New York dramedies– definitely has Woody in his head for “The Meyerowitz Stories.” Baumback– praised for “The Squid and the Whale,” “Frances Ha,” for his writing work on Wes Anderson’s “The Fantastic Mr. Fox,” and for a film I loved called “Mr. Jealousy”– has made his “Hannah and Her Sisters” with “Meyerowitz.” It’s a cut above.

It’s a New York story, an Upper West Side story, and let’s face it, a Jewish story although I don’t think there’s much mention of religion. Respected art professor and sculptor Harold Meyerowitz (Dustin Hoffman, in an Oscar performance) has been married to Candice Bergen and they have one son, Matthew. played by Ben Stiller. Harry’s first wife brought him two older children, in the form of Jean (Elizabeth Marvel) and Danny (Adam Sandler). Danny has a college freshman daughter (Grace van Patten). Now Harry’s married to Maureen (Emma Thompson),a genial dipsomaniac.

Cut to the chase: “Meyerowitz Stories” is about family and success and approbation. Matthew lives in LA, is a business manager and very successful. Danny and Jean are oddballs, make no money. Both sons’ marriages have broken up, Jean has no life to speak of.  All of their lives revolve around Harold, who’s around 80, is completely self involved. He’s jealous of the success of his longest friend, L.J. (Judd Hirsch) who’s really a nicer guy than you think.

So what happens? With Harold as the sun and the rest of these people as planets orbiting Harold, we learn their past relationships, their current ones, and how they will have to live with each other as adults. There are no car crashes (although Danny certainly seems like he might get into one, given his Manhattan style road rage). On the face of it, there isn’t much plot but there really is, and Baumbach weaves it all together with tremendous satisfaction. You’re unlikely to find a better written script this Oscar season, that’s how rich and textured Baumbach’s work is. He drills down into each character– even minor ones, like the one played by Candice Bergen, who has a disarming moment of beautiful dialogue and pathos.

Sandler — look, we make fun of his weird movies where he acts like a handicapped child. But here it’s like he was in “Spanglish” or “Punch Drunk Love.” He carries a third of the movie with Hoffman and Stiller, with such grace and authority you want to shake his hand. Stiller — coming off “Brad’s Status”– continues to show his wide range. Thompson is a hoot, van Patten is just lovely. But it’s Dustin Hoffman who commands the screen. He’s kind of the older version of Jeff Daniels’ father from Baumbach’s “Squid and the Whale,” only more talented, less successful, and more deeply screwed into the psyches of the other characters.

Yes, “The Meyerowitz Stories” seem like a throwback. They are not multicultural on their face. But I think you could make this screenplay with families of any persuasion and it would resonate. These are universal themes, and that’s what makes them so heartbreaking and funny.