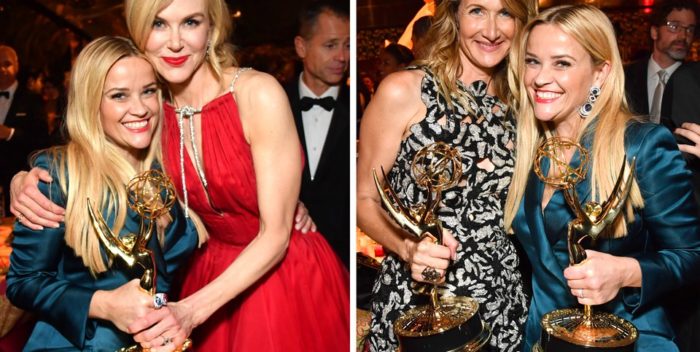 The Emmys are over, and Robert DeNiro is already back in NYC.  Bob jetted in and out after the Emmys, he was nominated for playing Bernie Madoff in HBO’s “The Wizard of Lies,” but went back right after to start his first day on Martin Scorsese’s “The Irishman.”

Bob sadly didn’t make the mecca of all parties, the glamorous HBO party at the Pacific Design Center.  No other party comes close to topping this A list soiree and last night it really rocked as HBO picked up 29 Emmys.  Nicole Kidman, towering and radiant in red, was mobbed with well wishers as soon as she walked in.  Nicole and Keith Urban were just the most adorable and when philanthropist Barbara Davis came to say hello, classy Nicole opened up her arms with glee to greet her.  Grande Dame Barbara just has that  affect on people!

Ben Affleck, looked happy and relaxed with  girlfriend Lindsay Shookus — a producer from the “Saturday Night Live” — sitting with Jeff Garlin and Larry David of “Curb Your Enthusiasm” —  cracking up at everything Larry said.  Larry was in good form and quite the social butterfly.  Seth McFarlane came in late and worked the room in lightning speed.  Julia Louis Dreyfus told me that it’s “the right time for “Veep” to end next season, but bittersweet.”  She was looking to see who had her statuette.

Reese Witherspoon in a blue Stella McCartney blazer dress with her look alike daughter 18 year old Ava Phillippe told me, “it still hasn’t sunk in”  that “Big Little Lies” picked up so many awards. The series’ director Jean-Marc Vallee, who won for best direction of a drama, came in with double fisted Emmys.  Alexander Skarsgard clutched his Best Supporting Actor Emmy followed by Laura Dern holding hers with her kids Jaya and Ellery in tow.

“Westworld” stars, Evan Rachel Wood, Thandie Newton, James Marsden and Jeffrey Wright — although they got shut out — were hanging with the winning “Veep” cast. Jon Hamm hugged Sofia Vergara who later hung out with Jessica Biel (sans hubby Justin Timberlake).   CEO Richard Pepler chatted with Michelle Pfeiffer and David. E. Kelley.  The vivacious Anne Heche with her “Big Little Lies,” husband James Tupper, “Leftovers” stars, Amy Brenneman and Jasmin Savoy and the winner for “The Night Of,” partied on with Riz Ahmed, saying he would want to come back for the next installment.

Debra Messing fielded all the “Will and Grace” comeback kudos with her typical grace-iousness.  Kate McKinnon said she was still “in shock” from her win. Producer Trudie Styler– husband Sting–  is on tour, Jaime King, Julianne Hough, Keegan Michael Key and Elise Pugliese congratulated “SNL” producer Lorne Michaels on all the show’s wins. Plus Dash Mihok, Mark Gatiss (from “Sherlock” and “Game of Thrones”) and oh so many more.  HBO’s Emmy party just cannot be beat.  It’s the most coveted ticket at Emmy season as well as it should be.