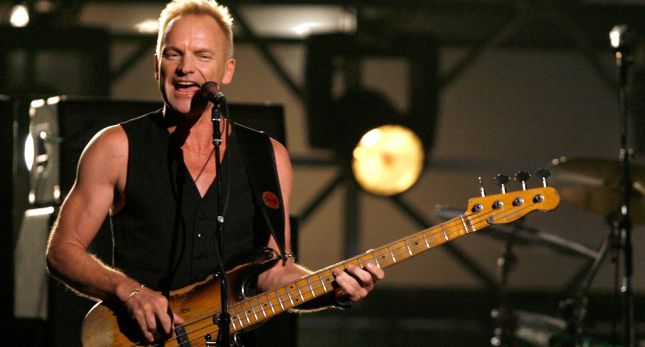 Sting will be honored in Washington DC at the Smithsonian’s National Museum of American History this coming Friday night (September 8th 2017). The evening will highlight his musical and philanthropic contributions to American culture.

At a special donation ceremony Sting will donate to the museum his iconic 1980s Fender Stratocaster guitar on which he wrote many of his Police hits and which played a crucial role in the start of both his solo career and his activism.

It was with that guitar that Sting made his first-ever solo performances at a benefit show for the human rights organization Amnesty International. His now-legendary set at “The Secret Policeman’s Other Ball” in London in September 1981 – documented in the album and movie of the same name – was the springboard for his eventual solo career.

Equally important it marked the beginning of his lifelong social and political activism. Sting has continued his support of Amnesty International to this day, and has been involved in multiple philanthropic causes – most notably the acclaimed Rainforest Foundation – which he started with his wife Trudie Styler in 1989 and which has become one of the world’s most respected non-governmental organizations.

Following the ceremony he will take part in a discussion moderated by Dan Rather about how he has combined his music with his social and political activism. The panel includes composer J. Ralph who collaborated with Sting on the Academy Award-nominated song “The Empty Chair” from the film “Jim: The James Foley Story”. The evening will include a special acoustic performance of the song by Sting.

In being asked to donate an iconic artifact to the Smithsonian that would relate to both his music career – and to his philanthropy – Sting decided to donate his black Fender Stratocaster guitar from the 1980s which he played on stage at a crucial turning point in his career.

Sting recently explained his decision to his old friend Martin Lewis – who back in 1981 recruited Sting to perform for Amnesty and who produced the show, album and movie:

“I’ve decided to give them my Fender Strat from the eighties, the one I used on ‘The Secret Policeman’s Other Ball’. There are a number of reasons why I think this is the right choice… I wrote a lot of my hits on that guitar (“Message in a Bottle” for one). That performance marked the beginning of my move to a solo career (thank you for that!) It also marked my long-standing and continuing association with Amnesty International.”

Lewis commented: “I know first-hand from my own experiences that Sting’s participation in ‘The Secret Policeman’s Other Ball’ was an inspiration to numerous other musicians who subsequently supported Amnesty International and stepped up their own social and political activism.”