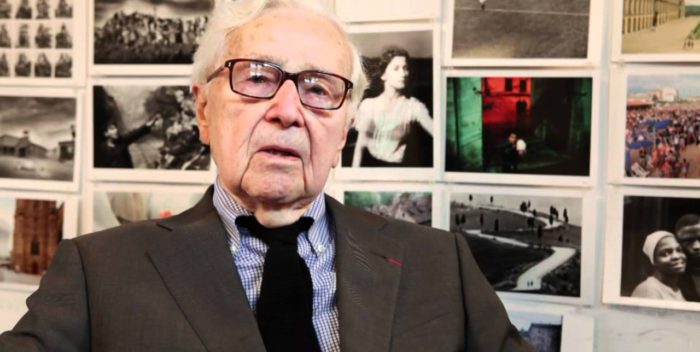 I’ve put off this piece for about a day. But John Morris, the only friend I ever had who made it to 100, has passed away. He’s the most famous photo editor ever in journalism having worked at the New York Times, The Washington Post, Life magazine, and National Geographic. John sort of invented the whole thing at a place you wouldn’t think of– Ladies Home Journal. He was there when Robert Capa started the famed Magnum Photo agency. John was there in the room when Robert Kennedy was killed. You can read a brilliant history here. On Saturday the New York Times devoted an entire page to him.

When I asked him last year about Olivia deHavilland, who lives in Paris had just turned 100 herself– did he know her? He answered, “Of course, we have drinks.” Let’s put it this way– when we first met 31 years ago, he was not that impressed about all our various connections to the Picasso family. He’d met Pablo Picasso and all the characters — long gone– who could fill a John Richardson book.

John had three wives, and three marriages of 20 years apiece. His last wife, Tana Hoban, was a very successful children’s book author and photographer. She was the sister of novelist Russell Hoban and one of the most delightful people I’ve known– a real twinkle in her eye always. They moved to Paris and I met them in their first apartment on the Ile Saint-Louis through my friend, the food writer and cookbook author Martha Shulman, in 1986. Friendships were ignited and they never ended. Later John and Tana moved to a Soho style loft in the Marais right off the Place des Vosges. They were regulars at Chez Janou. They were stars.

When Tana became ill a few years ago, John– who was well into his 80s–drove back and forth to her suburban nursing home. He was as devoted as if they’d been married all their lives. He continued to work on his photos, lecturing, and publishing. John and Tana were very involved in Democratic politics as ex-pats and hosted countless meetings at their place against Reagan, both Bushes, and so on. John was vehemently against Trump. His  online newsletters (which he composed, he picked up IOS fast) were treasured gifts.

For someone who rounded 90, John was incredibly busy and active. When I’d get to Paris, usually on the way to the Cannes Film Festival, he was making plans or just returning from a trip. After Tana died, he acquired a lovely lady friend who was “much younger,” John joked– she was a young thing of 84. With his silky white hair and his appetite for adventure, John was like the Indiana Jones of photography. Plus, he had all those great stories of heroics from the newsroom to the front line. And believe me, when he was in New York, it was hard to get on his dance card because so many editors in chief around town wanted to see him.

John only became ill really for the first time last fall as his 100th birthday approached. It seemed hard to believe this life force was going to come to an end. It didn’t right away, but really, what else could he do? He’d done it all. I can’t believe when I go to Paris this fall he won’t be there. It’s the end of an era for his family, his followers, his editors, and for his friends. But he will remain distinct in our lives forever and he will be missed — as will Tana– sorely. I’ll visit Chez Janou to raise a glass of red wine and say goodbye.