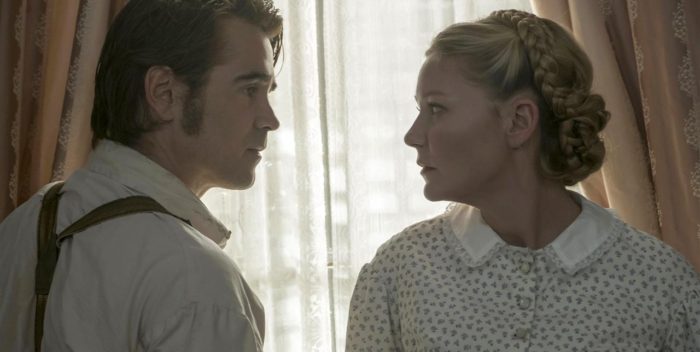 Sofia Coppola won the Best Director prize at Cannes this year, so it’s only natural she’d do a victory lap in New York this week. The film she won for– “The Beguiled”– is a hit and maybe the first Oscar buzzed movie of 2017. Nicole Kidman, Colin Farrell, Kirsten Dunst and Elle Fanning star in this gothic Civil War retelling of a really not great 1971 movie that starred Clint Eastwood and Geraldine Page. (More on that movie in a minute.)

A raft of interesting people turned out at the hip Metrograph Theater for “The Beguiled” opening including Coppola and Dunst. In pictures from the event you’ll see a woman posing with Coppola who looks like she could be her sister. That’s Huma Abedin, aide still to Hillary Clinton, and survivor a bad, bad marriage scandal. Huma proved that living well is the best revenge. She looked like a million bucks. She told me she’s working with Clinton on her new memoir, due in September. And she also told me she’s almost officially divorced.

People run hot and cold on Huma, but I’ve known her a long time. I’m glad to see she’s survived. And thrived.

Also there: Michael Stipe, of REM fame, one of my favorite people. He’s got a David Letterman beard I wish he’d shave. It was great to see him. If only he’d make a new album. But there’s plenty of REM catalog to enjoy!

Meanwhile: Coppola shined in a beautiful dress by Marc Jacobs, who co-hosted the event.

So what’s the deal with “The Beguiled”? I watched the original Don Siegel movie based on the novel by Thomas Cullinan earlier yesterday. It is one weird movie. It’s sort of like “Misery” set in the Civil War before “Misery” existed. Eastwood– devastatingly handsome, you forget– is a sex object of these love-starved girls and women on a plantation in Virginia. He’s a Union soldier.

Coppola, who has an unerring eye, saw something in the original film about women, empowerment, and sex. So she took the Siegel movie as a bad first draft and reinvented it. She stripped it back to the novel’s roots, and threw out all the junk. There’s still simmering sexual tension, throughout, but there are no looney in and out close ups, no Page twirling her mustache– so to speak. Coppola eliminated a female black slave who lived on the plantation, a weird scene in which Clint open mouth kisses a 12 year old, and a fantasy menage a trois.

Now Nicole Kidman is just spectacular in the Page role of Miss Martha, who runs a seminary for young ladies in her deteriorating plantation house. Dunst is her head teacher. Elle Fanning is the eldest student. They are all smitten with Farrell, in the Eastwood, role. But now it all makes sense. Coppola and co. have straightened out Siegel’s issues. “The Beguiled” is no longer “The Rocky Horror Picture Show.” The Farrell/Eastwood character is three dimensional.

There’s still plenty of gore (Farrell’s soldier bleeds a lot and requires some DIY surgery). There’s sexual flirtation but Coppola has eliminated the wackier aspects of it. Coppola brings a real authority, as always, to her work, that makes the movie feel polished but natural, formal but intimate. Kudos to editing, design, and lighting.

Kidman just keeps evolving and trying new things. She gets more and more interesting as we paddle on. What a career!