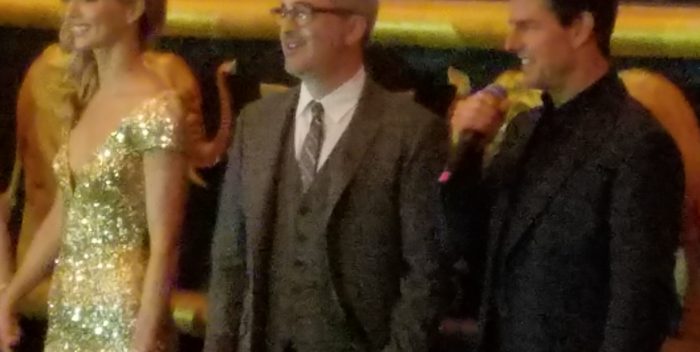 There was quite a juxtaposition last night at the New York premiere of Tom Cruise in “The Mummy.” For one thing, an hour earlier, Sony Pictures Classics had a premiere in the very same Upper West Side AMC Lincoln Square complex for an Oscar buzzy film with Ethan Hawke and Sally Hawkins called “Maudie.”

The “Maudie” guests entered through the side door, only vaguely aware of the Def Con 5 security arrangements going on for “The Mummy,” which featured a tented red carpet out front on Broadway. For the first time I can remember, police also blocked off traffic on West 68th St. between Broadway and Columbus with barriers.

Later, at a dinner gathering for “Maudie” at the nearby American Folk Craft Museum, guests wondered about the firepower that had greeted them as they entered AMC Lincoln Square. “The Mummy” — not their movie– required NYPD terrorist squad police touting machine guns and wearing flack jackets. They were not just boys in blue but men in black who looked ready for a riot or any number of attacks.

This may have been because the original premiere of “The Mummy” had been scheduled for London’s Leicester Square. But after the Manchester attacks, that event was scotched. This premiere, not in the plans, had been so hastily assembled that to fill the balcony of the theater Universal handed out free tickets to the audience at the Tonight show, which Cruise taped just prior to coming uptown from Rockefeller Center. So while the perimeter was being held down outside by a small army expecting invited guests, a phalanx of 200 or so strangers arrived from NBC. That made total sense.

One insider said of the counter terrorism squad: “This is the new reality for public events.”

Once inside, Cruise, director Alex Kurtzman, and members of the cast (except for Russell Crowe) appeared at the front of the theater for introductions. Usually the director speaks about the experience, then introduces the star and so on. But this was the reverse: Cruise spoke, Kurtzman nodded and filled in missing names to be thanked. A very animated Cruise called everyone “brother” (that’s the new “dude” or “man.”) Cruise also plugged his late fall movie with Universal, “American Made,” which already looks from the trailer about a hundred times better than “The Mummy.” (That film’s director, Doug Liman, was sitting behind me.)

Cruise’s bottom line: “When I make a film it’s something that I just don’t make a movie, I’m always thinking of this moment of entertaining you, and I give it everything I have and everyone knows I expect it from everyone else.”

When the screening was over transportation arrived to take invited 300 guests to Tavern on the Green for a filmmaker’s dinner. Machine guns optional.