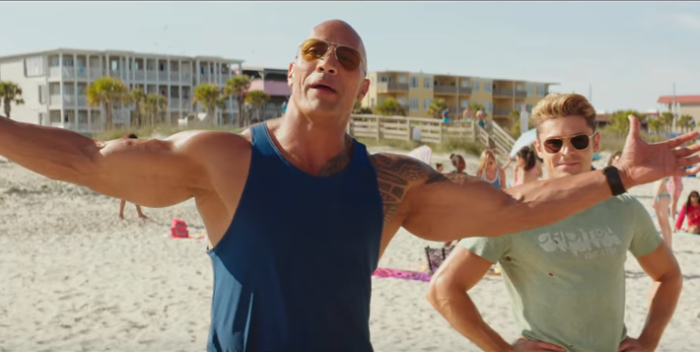 Hollywood is facing a very bad weekend unless there’s someone who hasn’t seen “Guardians of the Galaxy, Vol. 2.”

Paramount’s “Baywatch” with Dwayne Johnson and Zac Efron is a disaster. Currently at 9% on Rotten Tomatoes, our Leah Sydney says it just falls flat. (See her review below.)

Disney’s 5th “Pirates of the Caribbean” movie has a 33, which ain’t much better. After the first night, big things are not expected.

The “Baywatch” situation was predictable. All parties insisted that the “Baywatch” premiere had to be in Miami because of Johnson’s schedule. But he hosted “Saturday Night Live” on Saturday night so he could have attended a Sunday premiere. Instead, the premiere was held away from the glare of New York and Los Angeles press.

Ok-truth be told, I truly wanted to love “Baywatch.” But after the first five minutes which showed loyal lifeguard Mitch Buchannon  (Dwayne Johnson) saving someone while dolphins high five each other, coupled with a catchy soundtrack, trainer toned spray tanned bodies all cavorting and frolicking on the heavenly beach, all seems that you’ll be on a fun kitschy ride.

Alas “Baywatch” quickly starts to sag, bodies thankfully still unaffected by gravity, and just keeps drowning throughout.  Zac Efron (when you first see his six pack you do a double take and actually think it’s a special effect) plays screwed up arrogant, yet of course emotionally wounded, ex Olympian Matt Brody. Kelly Rohrbach, Alexandra Daddario, Ilfenesh Hadera and especially Priyanka Chopra (playing evil very well) all do what they can with a limited script and confused direction.  Jon Bass has a good turn, as does Cosby outer Hannibal Buress.

The actors aren’t the problem; it’s the filmmakers’ indecisiveness.  Unfortunately they never decided what they wanted this movie be, cheesy, serious, R rated comedy.  They missed the boat on all.  The murder plot line that affects the bay is supposedly the story, but it’s not engaging at all.  With that said, there are some funny, albeit few moments.

The audience laughed most at the outtakes at the end. The sense of play, especially with this pop culture icon, the cleverness and irony are just not there.  But hell it might do well.  There’s plenty of eye candy to go around.  As a friend who sat next to me said, “I love the fact that Dwayne’s T shirts are two sizes too small for him.  That’s enough for me.”  Lets see if audiences agree.