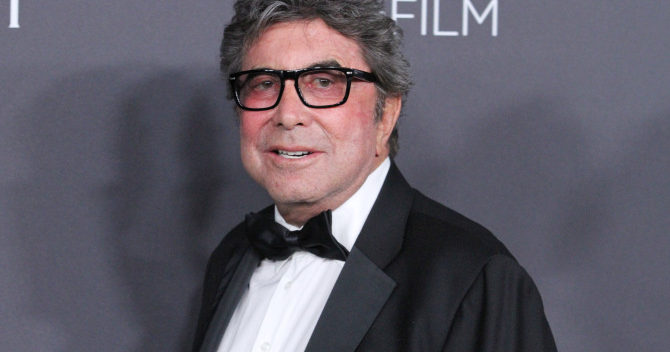 I’ve been to a lot of parties– in New York, Hollywood, Europe, wherever. But the best Hollywood parties are the mythic ones, in a home, where stars let their hair down and the biggest celebrities are just like you and me.

Sandy Gallin, who passed away last week at age 76, hosted such a party in January 2010. In his second career as a superstar house flipper among the rich and famous in Hollywood, Sandy “dressed” houses, then “staged” them for sale. During Golden Globes week in 2010, that’s what he did. And he invited every famous person he knew for a picnic dinner.

How did I get there? It’s hard to remember. A friend knew a friend, and they said, invite him. I was invited, but told I couldn’t write about it. Seemed fair enough. It was an adventure. And during those awards show weeks in Hollywood, it’s nice to get out of the hotel-restaurant world, and sit down in a normal setting.

Where was the house? I could not tell you. It was in Beverly Hills. The nice part. The house was big, and white, and had great views. It was decorated beautifully, but it was very cozy. It was not like Joan Crawford’s house in “Feud” with marble floors and staircases. This was funky chic. The living room was all big white puffy, overstuffed couches and chairs. The dining room had a long rich looking dark wood table for 20. And people moved around unfettered.

I told Jackie Collins I wasn’t allowed to write about any of this. I asked her, Will you? She said, “I already have!”

Sandy Gallin knew everyone in Hollywood, and they all loved him. Elizabeth Taylor had been his close friend. He’d managed Michael Jackson. His Gallin/Morey company was responsible for tens of dozens of success stories. Jane Fonda credited him with putting her together with his client, Dolly Parton, and Lily Tomlin, for “9 to 5.” (Sandy, Dolly is the first to admit, put her over the top as a superstar and icon.) So the guest list, well, this was something to behold.

It’s the only time I have ever been in a room with Jane Fonda, Barbra Streisand, Anjelica Huston and Shirley MacLaine. They were all there, eating with plates on their laps in the living room. Jane was with record producer Richard Perry. Barbra was with James Brolin. Shirley was an entity to herself.  Sisters Jackie and Joan Collins were each there. Extraordinary.

At some point, Elton John came through the front door. I remember sitting with him on the top of the couch (where Jane and Shirley were actually sitting, eating). That was the night he told me he was going to make an album with Leon Russell, and that Russell had been such a huge influence on him. “The Union” was released 10 months later.

Not everyone was an actor. I do remember chatting with Nancy Meyers in the kitchen. Roger Birnbaum, of MGM, was in there, too. There were a lot of people like that, the great behind the scenes talents. The great songwriter Carole Bayer Sager was eating at the long dining table in the narrow dining room between the kitchen and the living room with her husband Bob Daly, who used to run Warner Bros. Bob’s Warner’s cohort Terry Semel was also in there, with his wife, Jane.

One memory: Arianna Huffington explaining to me that, essentially, no one who wrote for the Huffington Post was paid; they depended on that. “Paying for writing is not our model,” she said.

We went on house tours in small groups, guided by handsome young men. The funniest thing about the house was the bookcases. The rooms seemed to have shelves filled with color coded covers. One room was all white books, one was all blue, another all red. Jane Fonda noticed this. She pulled a book off the wall, and opened it. It was all empty pages. She shook her head, and we all laughed. The epitome of Hollywood.

In the middle of this was Sandy Gallin, our host, around whom this all revolved. None of these famous people would have been there if not for him. He had a calming effect on them, a lot like the late agent Ed Limato. Loyalty bound everyone together. This was unusual in a city in which almost no one is loyal. They all had stories about when they met Sandy, and so on. For the first time ever, at that party, I had the feeling Hollywood– at least the Hollywood of the great 1970s, which this group personified– was a community. It was lovely.

It was also a cold night. I do recall sitting by an ottoman near the front door, piled high with fur coats. I can’t say they were real fur. There was a discussion among the ladies about how they were ‘getting away’ with fake fur, too. Soon, the half dozen or great stars were air kissing goodbye and pouncing on the coats. “Joan, this is your coat,” Jackie Collins said, and Barbra Streisand may have said something similar to Shirley MacLaine. There was a simultaneous laugh. Everyone kissed Sandy goodbye, grateful for this moment in time.