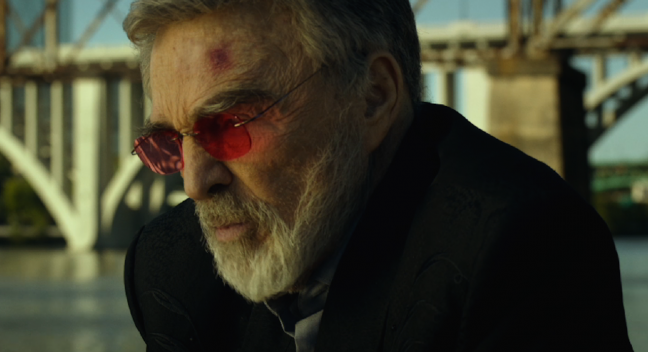 Adam Rifkin’s “Dog Years” unspooled last night at the Tribeca Film Festival last night. It’s a little gem of a film along the lines of last year’s “Grandma.” Only this time, instead of Lily Tomlin, the “comeback’ star is Burt Reynolds, now 81 years old (hard to believe) and reflecting on the subject of faded stardom after a life at the top of Hollywood.

“Dog Years” also features another octogenarian, although you’d be hard pressed to see her that way off camera: Kathleen Nolan, who’s 83, the first female president of the Screen Actors Guild, a popular and regular presence on TV starting with the late 1950s TV show “The Real McCoys.” “Dog Years” is her first acting job since 2008 and she hasn’t missed a beat. This turns out to be perfect casting in a very meta- movie, since Nolan and Reynolds once appeared together in an episode of “Gunsmoke.”

The meta part is that Rifkin has made a very clever turn for Reynolds– whom he obviously adores– in “Dog Years.” Reynolds plays a faded and forgotten movie star named Vic Edwards, who can barely walk without his cane and whose life as a playboy has been reduced to a lonely rattle through a big ranch house after putting his aged dog to sleep. It’s sort of “Sunset Boulevard.”

And then Vic gets an invite to a retrospective of his movies and a Lifetime Achievement Award from the International Nashville Film Festival, all expenses paid. Of course, it’s a rinky-dink set up, but brings Tennessee born Vic, whose real name is Marty Schulman, back to his home and a lot of memories. Set up with a driver (a hot mess well played by “Modern Family” actress Ariel Winter) Vic takes a stroll down memory lane via clips from the real Burt Reynolds’ movie career posing as Vic’s credits and even some clips from Burt’s famous appearances on the “Tonight” show with Johnny Carson.

Nolan comes in, in present day, as Martys’ first wife, now living in a Knoxville nursing home and suffering from Alzheimers. Rifkin lets her play a scene with Reynolds that’s most affecting and very touching in which Nolan utters almost no words and meet the challenge with grace.

Reynolds, who came to the screening last night, plays Vic with disarming clarity and charm. He has had his share of public troubles involved aging and finances over the last few years. He is not the big swinging star he once was– but you should remember that few at his age are. That’s the reason Gene Hackman retired, Jack Nicholson withdrew, and and so on. The theme of “Dog Years” is that ‘Aging is Not for Cowards.’ Vic Reynolds, the character, is living because he has no choice. Once the King of the World, he’s now limping through the supermarket using a cart as his walker, buying frozen dinners. It’s far cry from the days of, as he says, “banging everyone”– every pretty young thing– he worked with.

“Dog Years” is funny and poignant but Rifkin avoids cliches. The Nashville setting is refreshing, too. Reynolds, Nolan and Winter are all excellent, and there’s a terrific supporting cast that includes Clark Duke (last season of “The Office”) and Ellar Coltrane of “Boyhood” fame who has an easy way on screen.

“Dog Years,” which should find no trouble finding a distributor, also has value-added in lots of good music. Willie Nelson sings the closing credits song, written by Diane Warren, that should find a Best Song nomination later this year. And there are 11 more original and very catchy songs on the soundtrack by Jamie Floyd and John Martin, a pair of Nashville duo who record as Stranger Friends and just signed a deal with Sony/Red.