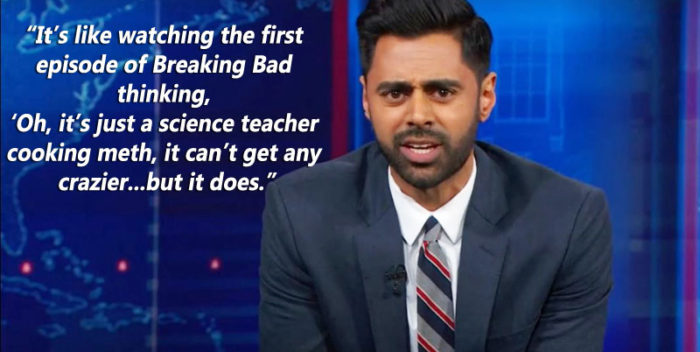 Donald Trump has pretty much gotten his way as far as decimating the White House Correspondents Dinner.

This morning the group announced a last minute emcee, roastmaster, and it’s the most obscure person they could find for a high profile event. Hasan Minhaj– raise your hand if you’ve ever heard of him– will preside over the WHCD on April 29th. He’s a senior correspondent for The Daily Show. Okay.

Preside over what? Good question. All the major parties are cancelled. A list celebrities will be scarce. Oh yeah, the President isn’t coming and no one from his staff is, either.

Maybe Minhaj will be funny. But he’s not Seth Meyers or Conan O’Brien or even Cecily Strong.

The WHCA’s big get for the evening is Woodward and Bernstein– Bob Woodward and Carl Bernstein, of Watergate and “All the President’s Men” fame– will speak and give out some awards. But this is like inviting Simon & Garfunkel because this pair are not friendly in real life. So I’m sure they won’t appear on the dais together.

The Correspondents Association also announced that their executive director of 20 years, Julia Whitson, is stepping down.