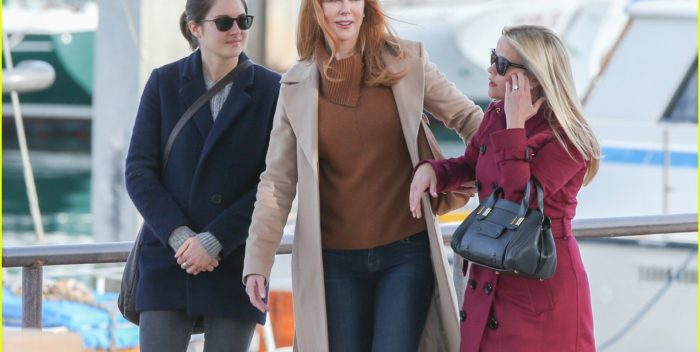 HBO has another massive hit on its hands with the new limited series, “Big Little Lies,” directed by Jean-Marc Vallee and executive produced by David. E. Kelly, which had its premiere Tuesday night in Hollywood.

The powerhouse stars were there in force: Nicole Kidman, with her ever-adoring husband Keith Urban, who told me he’s “a little nervous” about playing the Grammys this weekend.  Reese Witherspoon came with her agent husband Jim Tosh and her look a like daughter Ava Phillipe, the always gracious Laura Dern was in the house,  and “Divergent” star  Shailene Woodley– who told me what while she was saddened by the Dakota Pipeline news but told me she and her fellow activists, “are never giving up.”

The luminous Zoe Kravitz, rounds out  this quintet of truly talented actresses.  Based on the best selling book from Australian author Liane Moriarty, the show from the get go has you hooked with its’ murder, dark secrets, family demons and so much more. Jean-Marc Vallee directs the show, and he brought to the project his “Wild” stars Reese and Laura. Vallee is best known for directing “Dallas Buyers Club.”

Adam Scott, Jeffrey Nordling and James Tupper (husband in real life of Anne Heche, who at the screening) play the husbands. New HBO head Casey Bloys couldn’t resist a dig at Trump when he introduced the film by quipping, “see, Australians and Americans can work together!” The show takes place in Monterey CA, so the after party at the Roosevelt had a beachy themed atmosphere.  I’m already addicted, trust me you will be too.