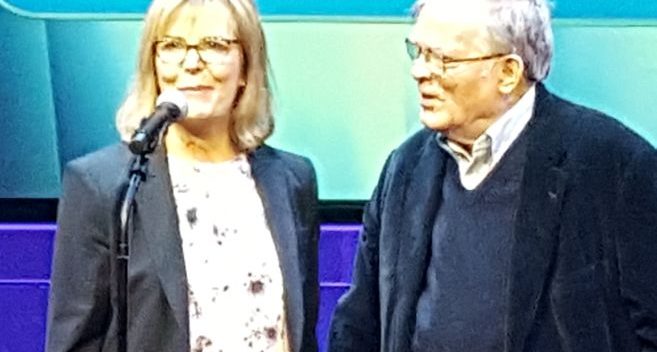 DA Pennebaker and Chris Hegedus were presented with the first ever Lifetime Achievement Award from the Critics Choice/Broadcast Critics last night in Brooklyn at a moving ceremony that also may have shaped this year’s Oscar race for documentaries.

Now we get a better idea that Ava Duvernay’s “13th,” from Netflix has become a big contender. So have Jack Kriegman and Elyse Steinberg‘s “Weiner” and the newly released “Eagle Huntress.” Ron Howard’s Beatles documentary was a cinch– Apple Records’ Jeff Jones came in from London to accept an award.

Pennebaker, 91, the filmmaker of “Don’t Look Back” and “The War Room,” among others spoke movingly about his 40 year relationship and marriage to Hegedus, his co-filmmaker. “She came to see me for a job and I made sure she never left,” he said. Their most recent film is “Unlocking the Cage,” a potential Oscar nominee this year. Pennebaker’s career stretches back to 1958. Hegedus won the 2001 Award from the Directors Guild for her “Startup.com.”

The amazing Sharon Jones won Best Song for Barbara Kopple’s wonderful movie about her called “I’m Still Here.” The Renaissance R&B dynamo is taking some downtime before exploding again on the tour circuit. Check out her music on YouTube and Spotify. It will blow your mind!

Most Innovative Documentary – The Tower