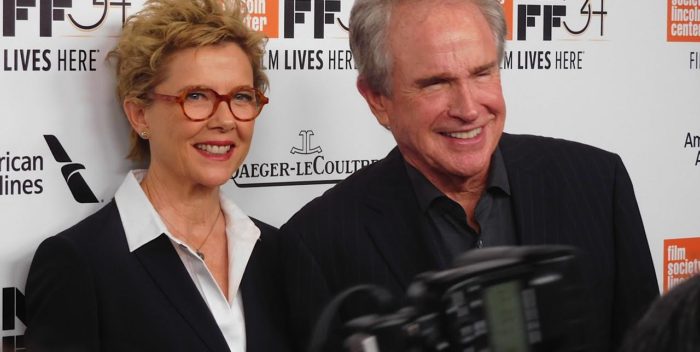 What a night for Warren Beatty and Annette Bening! First they were feted at the annual Museum of the Moving Image gala on Park Avenue. Then they took a bunch of friends including directors Barry Levinson and James Toback across the street to the Regency Hotel bar to watch the Cubs win the World Series.

The Museum dinner was full of A listers not only including Levinson and Toback, but stars of Beatty’s new movie “Rules Don’t Apply” including Matthew Broderick (with Sarah Jessica Parker), Alden Ehrenreich, Lily Collins and Candice Bergen.

Sony Pictures Classics chief Michael Barker, who helps helm the Museum (a great resource based in Queens) gave his own heartfelt toast to Beatty, as did the star’s wife, Annette Bening.

Patinkin, who appeared in “Dick Tracy,” recalled Beatty hiring him over the phone. “He said, Stephen Sondheim is writing a song for you. I said, Okay. Then he said, You may have to sing it with Madonna. I said, Okay, again.” Patinkin was just happy to have work. He couldn’t believe what Beatty did for him.

And that was the tone of the night, one of the best Museum of the Moving Image dinners ever–Beatty is loved, and he’s glowing in return. He talked about his four kids — he calls them “four little Eastern European countries”– and it’s clear he and Bening have found rare Hollywood bliss.

More from the dinner later today– and PS it was Bening who said, when the dinner was over, “We’re missing the World Series!” That’s when a little “Bugsy” reunion coalesced and suddenly the sports fans hanging out in the Regency bar had a bunch of Oscar winners and nominees cheering for the Cubs in their midst!