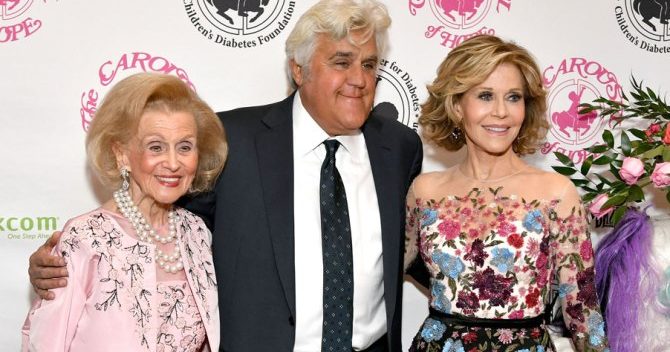 That’s what her dear friend Clive Davis so aptly put last night at the 30th anniversary of her famed, “Carousel Ball,” at the Beverly Hilton. Only Barbara, in her tres elegant pink ball gown, could bring the A list out, help find the cure for childhood diabetes, which her daughter Dana was diagnosed with when she was seven. The event has raised over $100 million dollars to date.

Clive’s music biz attorney son Doug Davis chatted with street artist Thierry Guetta aka Mr. Brainwash and Nikki Haskell while Raquel Welch and Melanie Griffith huddled. I asked Don Rickles how does it feel to be so adored? He told me, “When you’re 90 years old in a very competitive business with a humor that was not accepted when I first started. Then I got success and I’m doing what I believe in.” I asked how he felt about Barbara. “I go way back with them, Barbara and Marvin. She’s a joy and a woman that everyone respects. She does so much for everyone.”

Master of Ceremonies Jay Leno got the evening going. Jay, mindful that this was a charity event with children in attendance as well, played it safe but did touch on Trump, “Have your heard about Donald Trump’s new reality show, ‘The Amazing Racist’? Hey, the approval rating for President Obama is 55%, the other 45% being taxpayers,” When I asked Jay beforehand what the thought about was going on, he told me, “I find it all scary.”
Sharon Stone joined Jay for the live auction, which included Dubai and Aspen trips, as well as a VIP trip for David Foster’s Miracle gala. She quickly netted almost $200,000. 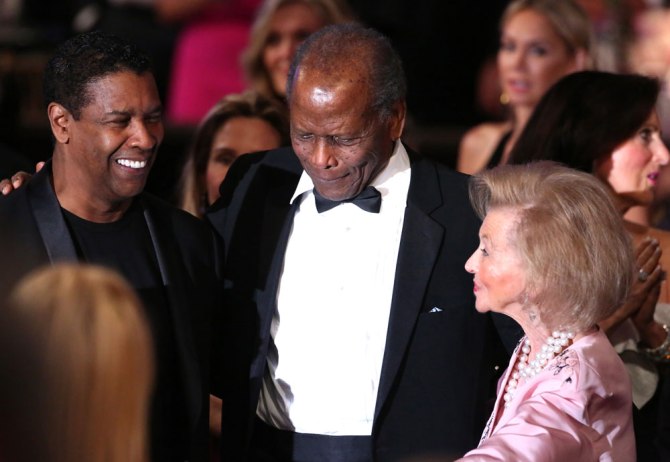 Denzel Washington called Sidney Poitier “his hero, mentor and friend,” as he presented the movie legend with his Inspirational Lifetime Achievement Award. Sidney, characteristically gracious, paid tribute to his longtime friend Barbara. “I have tried to be good human being, a good actor, director, filmmaker, all of it. But I didn’t come close to the wonders of the lady we are all gathered here tonight for.”

Broadway chanteuse Idina Menzel, the voice behind the ubiquitous “Let it Go,” took the stage and quipped, “I’m not going to sing that song. It’s not on the set list.” She did sing “Defying Gravity,” from “Wicked,” and two songs from her new album. Carole Bayer Sager presented one Brass Ring Award to David Foster, Angelica Huston gave former Paramount chief Sherry Lansing hers, and Quincy Jones presented one to two time Oscar winner Jane Fonda, who described her friend Barbara as “generous and fiercely dogged.”

“The Blind Side” actor Quinton Aaron did a version of Marvin Gaye’s “Lets Get It On,” that had the room transfixed. , Guests included songwriter Diane Warren, producer/songwriter Bruce Roberts, The 5th Dimension star singer Marilyn McCoo, and Billy Davis Jr, Kathy Griffin, Suzanne Somers, Maureen McCormick, Jerry and Linda Bruckheimer, Ed Begley Jr and his wife actress Rachelle Carson, Carmen Electra, Vivica A. Fox and more. There was not one empty seat in the ballroom.

Jamie Foxx ended the night with a spectacular musical performance, singing James Brown song , joined by Barbara and her wonderful family, including her philanthropic daughter Nancy Davis, who raises millions for MS, her husband entrepreneur Ken Rickel and their lovely daughters twins Isabella and Mariella.

Barbara Davis said, “As I look at this ballroom, I don’t know how to thank you all. When we reach for the brass ring, we’ll have the cure. “ Wonderful glorious Barbara, no one doubts you!