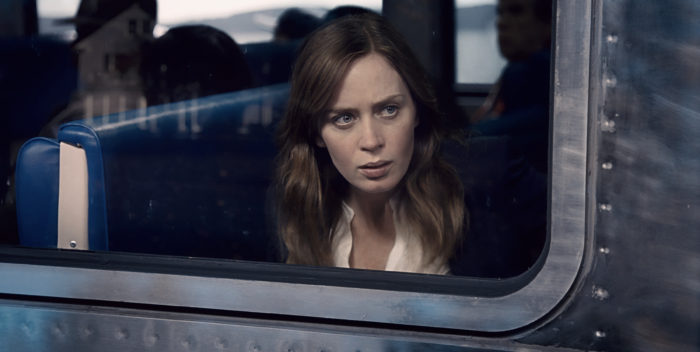 Universal threw an old fashioned lavish Hollywood premiere party last for “The Girl on the Train” at Grand Central Station’s Vanderbilt Hall in New York.  It was the perfect location since Grand Central is presumably where Rachel, Emily Blunt’s character, would hang around after arriving from Ardsley and before returning there to stalk her ex husband (played by Justin Theroux). Since Rachel’s a raving alcoholic I doubt she sampled the terrific food we got which is available every day in the Food Hall! (She probably just hit the bars.)

Sadly, star Blunt — who does such a great job as Rachel– was under the weather, so she missed the big gala after a plucky walk on the red carpet with husband John Krasinski. This was a disappointment, as was the absence of Laura Prepon and boyfriend Ben Foster, who also went from red carpet to who knows where. Maybe the foursome thought a party in a train station didn’t sound appetizing but it was quite the opposite considering Grand Central’s soaring architecture.

To the rescue came Justin Theroux (yes, he’s married to Jennifer Aniston) who kind of steals the film from Blunt and her female co-stars Haley Bennett and Rebecca Ferguson (who resembles in this film more than ever Ingrid Bergman). The latter is presumably off getting ready for the new “Mission: Impossible” episode. Edgar Ramirez, so good in “Hands of Stone,” also made the most of the premiere. He’s the red herring in “Train,” and he pulls it off with aplomb.

But Bennett, currently winning the west in “The Magnificent Seven,” was there. She told me: “This is my first day off in two years.” She has five more days before she heads to L.A. for “meetings,” she said, where she will pass on a lot of scripts. (She has a good sense of humor, I like her.) Bennett brought her whole family from Ohio for “Girl on the Train.” They could have taken the train home from Grand Central, but they’re sticking around.

Listen: Justin Theroux has been starring in HBO’s “The Leftovers.” He’s not in “The Girl on the Train” to twiddle his thumbs. He’s the break out (if you know the novel, you know what I mean). He’s very good. We did not discuss Brangelina.

Tate Taylor directed “Girl on the Train.” He also directed “The Help.” He’s good with a big cast and a complicated story, as “Girl on the Train” has more going on than an episode of “Days of Our Lives.” But he keeps the tense taut, and Blunt is a delicious drinker. It’s not easy to play an unsympathetic protagonist. Eventually Rachel goes from “being a blur” to getting in focus  thanks to the keen actress.

But my advice, as with all movies, is: stay out of the suburbs. Bad things happen there! You’re safer in New York, where the crime rate is nil and you have a door man. And really, use Uber or buy a car. Paul Simon said Everyone loves the sound of a train in the distance. But wait til you have to find a seat.