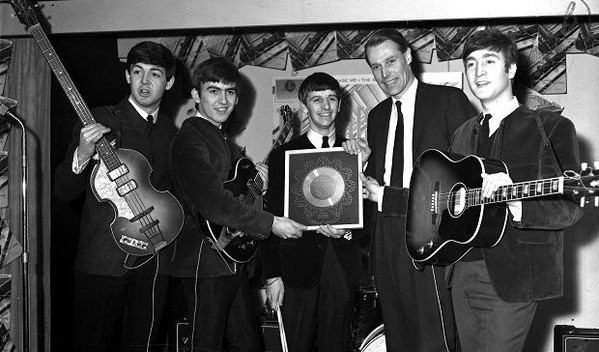 What is the Daily Mail smoking? (Well, I ask myself that a lot.) They report today that the Beatles’ producer George Martin, who died earlier this year at age 90, left a 1 million-pound estate! Of course, the Mail is only concerned that one of Martin’s sons was cut out of it. They also say he produced “the Beatles’ early hits.”

Listen, Fleet Street, George Martin made a million bucks in his sleep. His estate must have been parked off shore, in a place like the Cayman Islands. It has to have been more like 50 million quid.

For one thing, Martin produced all of the Beatles albums except for “Let it Be.” (That was a botch job by Phil Spector.) He produced the Anthology albums, as well, plus “Rarities” and several other post-1970 editions.

A lot of that was chronicled by Martin himself in his 1979 memoir, “All You Need is Ears.” He was an employee of EMI through 1965, when he left and started AIR studios. He started getting a 2% royalty on Beatles albums at that time, and indicates in the book that the number rose to 4%. Martin also wrote the score for “Yellow Submarine,” and has publishing and mechanical royalties from that album.

In addition, Martin remastered the Beatles’ CDs when they were first issued in 1987. Years later, he and son Giles constructed the soundtrack for the Beatles’ “LOVE” show in Las Vegas, which produced a best selling album. It was quite literally their invention, and it has sold and sold. Now that it’s downloadable and streaming everywhere, “LOVE” should have made the Martins quite wealthy.

Plus, Sir George had monster hits with the group America. Their “History” album of greatest hits continues to be a huge catalog seller. (He gave them “Tin Man” and “Sister Golden Hair,” which are played non stop on oldies radio.) George got a permanent cut of that action.

And then there’s Martin’s AIR Studios in Montserrat in the Caribbean. This is a huge, thriving business where everyone from Adele to Pete Townsend, and of course Paul McCartney have recorded.

And that’s probably the tip of the iceberg.

A million pounds? Not likely. Sir George was definitely whistling “Baby you’re a rich man” right up to the end. Daily Mail, get a grip.