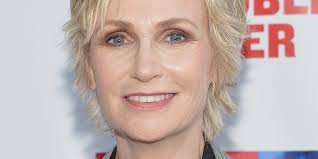 The mighty Jane Lynch– one of the stars of Christopher Guest’s upcoming (and hilarious) “Mascots”– turned up on Thursday at Doris Bergman’s annual first-out-of-the-gate swag suite, where the great and the mortal meet to pick up all kinds of stuff. Swag suites are a bit like a Christopher Guest movie– in fact, he’d do well to make a mockumentary about them.

Jane told me — as she checked out the Sue Wong Couture– “I already had mine (she lost to Ru Paul for best Reality TV host,)  last week.  So it’s a bit anti-climatic for me, but I’m excited for Jimmy, he’ll do just fine.  Me, I’m staying home in my pajamas and watching.” She will no doubt apply the Sue Wong Couture System, with memories of “Glee” dancing in her head.

The Emmy Style and Fashion Lounge took place at Fig & Olive in West Hollywood, hosted by Ein Drink and presented by Dioo Audio, two of the many brands that are so popular with the in crowd. (Importantly, the suite also benefits the LA Foster Care programs.) Actor Jason Ritter, who will be in Amazon’s  David E. Kelley’s “Goliath” with William Hurt and Maria Bello and currently recurs on Comedy Central’s “Another Day,” and HBO’s “Girls,” was checking out way cool Dioo Audio.  He also was a fan, as many celebs are, of Debra Mitchell’s widely popular Twisted Silver.