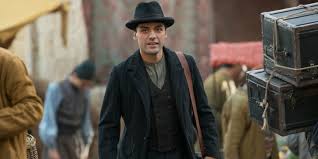 “The Promise”– the first ever Hollywood movie about the Armenian genocide of 1915-17– debuted last night in Toronto to standing ovation. Famed director Terry George made the film, funded by late billionaire Kirk Kerkorian– starring Christian Bale and Oscar Isaac. The sweeping epic is gorgeous, beautifully acted, and exacting in its laying blame on Turkey for exterminating 1.5 million Armenians.

The movie is notable because this week is the 100th anniversary of the genocide, the first Holocaust of the 20th century. “The Promise” also raises questions about the current waves of ethnic cleansing coming from Syria and the immigration of millions of refugees.

“The Promise” also serves as a counterpoint to the evacuation of millions of Jews from Russia around the same time, the story that most of us know from “Fiddler on the Roof.”

George, whose “Hotel Rwanda” is a modern classic, couldn’t film in Turkey as he once did in Africa. So he used Spain and Malta to re-create the Armenians’ tragedy, and the results are stunning. His screenplay, polished up from one by Robin Swicord, begins with a long exposition of life in Turkey for a love triangle played by a sensational Oscar Isaac as a young Armenian medical student, Christian Bale as an American reporter for the Associated Press, and Charlotte Le Bon as the beautiful daughter of a famous musical conductor.

Some of that is plodding, but it gives the film a narrative foundation for later in the story when the Turks go on the attack and the Armenians go on the run. “The Promise” switches into high gear at that point, and becomes incredibly absorbing as George depicts the horrors of Turkey attempting to wipe out an entire race. Turkey– which has never acknowledged the genocide or apologized for it– will not be too happy with this story, that’s for sure.

“The Promise” was funded by late billionaire former MGM owner Kirk Kerkorian, who died last year at age 98. It was his vision to see the story put on the big screen for a wide audience. He’s gotten his wish. Again, the budget looks like it was pretty high as production values are as good as I’ve ever seen in a film like this. “The Promise” is a visual feast.

In the audience last night– Canadian director Atom Egoyan, who made his own Armenian genocide film back in 2002– and writer/director Jim Sheridan, who has collaborated with George on films like “The Boxer” and “In the Name of the Father.”