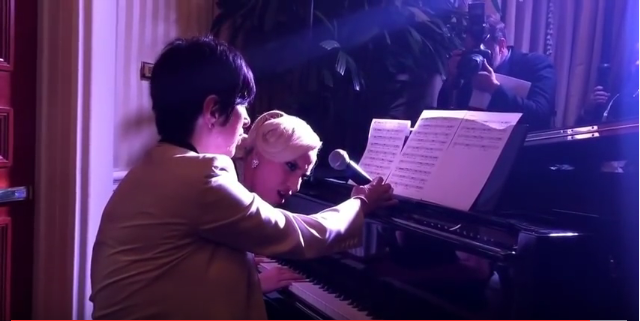 Showbiz justice was thankfully served last night at the Creative Arts Emmys for hit songwriter Diane Warren. She finally won an Emmy for her brilliant song, “Til It Happens To You,” recorded by Lady Gaga. The song comes  from the lauded  “The Hunting Ground,” about sexual assault on college campuses, which noted Amy Ziering produced and Kirby Dick directed. The song  has was nominated also for an Oscar and a Grammy, the first time in music history that a songwriter was nominated in the three competitions for the same song.  Warren deserved this win, and classy Diane thanked Lady Gaga, (who was not eligible for a nomination) and quipped, “I get to say my Oscar speech.”

Backstage, Warren  dedicated her win to her late publicist, Ronni Chasen, who was murdered as she was driving home from the premiere of “Burlesque.”  Diane won the Golden Globe that year for a song from that movie.

Peter Scolari, a last minute nominee, won his for playing Lena Dunham’s father on HBO’s “Girls.”  No surprise that “The Late Late Show With James Corden,” with its viral sensation “Carpool Karaoke,” won for Outstanding Interactive Program.  A poignant in Memoriam segment ended with, “We also remember those who died 15 years ago on September 11th, 2001.”