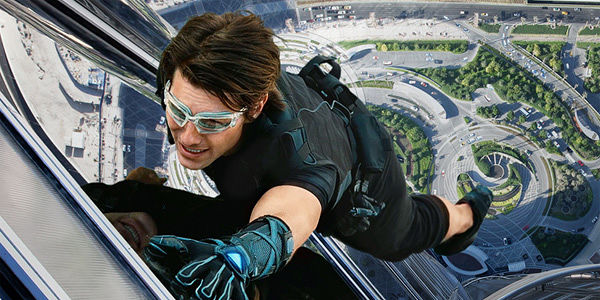 We all liked Tom Cruise in “Edge of Tomorrow,” or at least, we liked the movie. It made just $100 million, and that required leaving it in theaters well past its expiration date.

“Oblivion,” which preceded “Edge,” made just under $90 million.

In fact, you have to go all the way back to 2005 and “War of the Worlds” to find a Tom Cruise movie other than “Mission: Impossible” that’s been an out and out hit– “War” did $250 million.

And that’s why Tom Cruise wants more money for “Mission: Impossible 6.” Reports are that ‘soft’ lead up production was halted on “MI 6” this week because Cruise is still in negotiations. His agents are looking for bigger cuts of all the action. The reason is, “Mission Impossible” has become Cruise’s main stem income, just as “Pirates of the Caribbean” has for Johnny Depp.

They are actors who will one day (when we are old) get Lifetime Achievement Oscars. But right now, they are aging, and their expenses are going up while receipts are going down. Cruise doesn’t have a lot of years left for hanging off planes or repelling along the world’s tallest buildings, no matter what trainer he hires.

And then there’s the matter of living a very high life. As Michael Jackson learned the hard way, carrying lots of people, staff, family, flying on private planes, etc– it costs a lot, even if the studio pays for it. On top of that, no one really has any idea how much Cruise has devoted to Scientology. We can assume it’s a lot.

Meanwhile, Paramount has to be tense over dealing with Cruise. Not only is he a financial liability in some ways, but the studio has a lot of issues this year. Setting aside the whole Sumner Redstone saga, Paramount has had only one $100 million hit so far in 2016– “Star Trek Beyond” at $135 million, and it’s a money loser. “Beyond” cost at least $185 million, and worldwide has brought in just $215 million. Not good.

Of course, they do have Tom Cruise in “Jack Reacher 2,” but sequels traditionally do less well than the original films. “Jack Reacher” was not a big hit, so who knows?  Paramount is counting on a late 2016 for its hits–Martin Scorsese’s “Silence” and Denzel Washington’s “Fences” should be substantial successes, and bring in Academy Awards. But they’ve got to be eyeing “MI:6” with a wary wallet.