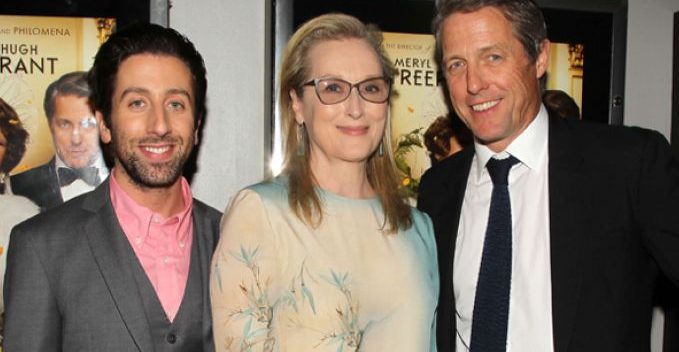 But the other Big Name is from the Big Bang Theory– Simon Helberg, aka Howard, one of the beloved nerds of the CBS hit sitcom. At last night’s premiere of “Florence Foster Jenkins.” Helberg was watching the clock. He was scheduled to fly out of New York at 3:45 am to be in Los Angeles this morning. The 10th season of “Big Bang Theory” is about to commence.

Is there an 11th season for the show? “I suppose there is,” he said. “A lot of people will come back and want to come back if asked,” he said. “And I would be one of them.”

Helberg is the breakout star of “FFJ” — directed to perfection by Stephen Frears— as he plays piano in the film himself, in all his scenes. Nothing is dubbed. Did he have real classical training? “I played in rock bands and popular music,” he said with a self-effacing shrug. “And I kind transitioned that to classical opera.”

He can take more credit than that. Helberg is totally convincing as Meryl Streep’s accompanist — or rather Florence’s. Was he intimidated by being in so many scenes with the World’s Greatest Actress? “I was before I met her,” he told me. “And then you realize how normal she is.”

The “Florence Foster Jenkins” premiere was one of the more laid back I’ve been to in quite a while. Streep and husband Don Gummer mixed and mingled at Brasserie 8 1/2 with everyone, and Meryl was gracious enough to take those annoying selfies everyone wants. She was especially happy to see old friends like one time drama school roommate John Rothman (who’s starring in Tig Notaro‘s Amazon series “One Mississippi”) and the great Carmen DeLavallade (widow of the famed Geoffrey Holder).

I was happy to see Meryl’s sister in law, Emmy winning actress Maeve Kinkead, who played Vanessa Chamberlain on “The Guiding Light” for nigh on 30 years. Kinkead tells me her first hook of poetry is coming from this January from the prestigious Barrow Street Press. It’s called “A Dangling House” and you can read one of the poems here. As she was finishing her run on “Guiding Light,” Maeve graduated from the Warren Wilson MFA Program for Writers with a degree in Poetry in 2008. This is quite an accomplishment. Bravo!

Also at the “FFJ” premiere: Nina Arianda, hilarious in the film, as always, plus “Crash” director Paul Haggis, and a rare sighting of Cars leader Ric Ocasek and his model wife Paulina Porizkova. They’ve been married since 1989– can you believe it? She must have been just what he needed!