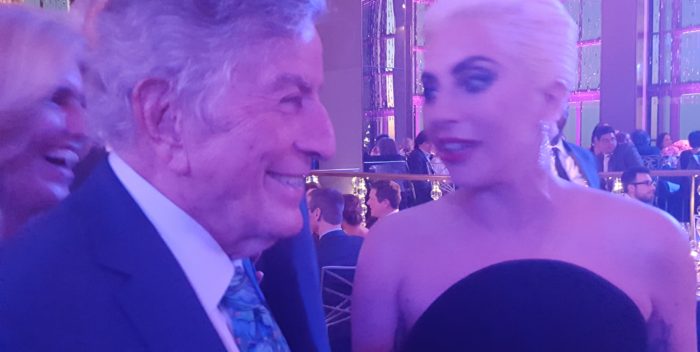 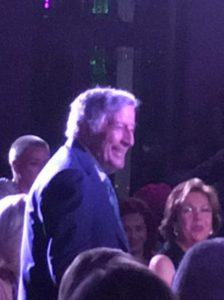 Tony Bennett’s 90th birthday party dinner at the Rainbow Room was something the guests will be talking about for the rest of their lives.

Lady Gaga performed an hour long show of jazz standards that could only be compared, I think, to Judy Garland or Billie Holiday back in their day. She capped it off with a bluesy version of her own “Bad Romance,” then joined Stevie Wonder for “Happy Birthday,” “I Wish,” and Stevie sang “You Are the Sunshine of Our Lives” to Tony, with Gaga on stage. And that’s the capsule version.

The guests! Paul McCartney and wife Nancy joined Tony and his wife Susan, plus Stevie at the main table. At the next table: Martin Scorsese with his daughter Francesca, Bruce Willis and wife Emma, John Travolta, Gayle King, Katie Couric and husband John. The great Harry Belafonte was there, so were Regis and Joy Philbin.

Through the room were the top music people from Sony (Rob Stringer), CAA (Rob Light), our old pal Jerry Inzerillo, and so on. The legendary writer Gay Talese came with his famous publisher wife, Nan.

Tony’s son, Danny, who’s also his manager, produced the show, along with the great in house PR maven Sylvia Weiner. Many of Tony’s kids and grandkids were there.

Governor Andrew Cuomo kicked off the night honoring Tony. His mother Mathilde and sister Maria were there, too.

At this point Tony was a little gaga himself. Stevie had a little recording device he carries him, plus headphones, and played Tony some new music he’s working on. Stevie and Paul, old friends, had a joyous reunion and couldn’t stop chatting.

Katie Couric read a top 10 list of all the cool things that happened the week of August 3, 1926. (Good news: the Yankees won.)

But it was some night for Lady Gaga. With her jazz band, she started with “New York, New York” and performed for about an hour. It was mesmerizing. She sang Charlie Chaplin’s “Smile,” a sensational “Lush Life,” “I Can’t Give You Anything But Love,” and Tony’s signature “I Left My Heart in San Francisco” among her 14 numbers. Her “La Vie En Rose” sent the crowd into a frenzy.

And it was Gaga’s night in a way. Bennett changed her life, taking her from meat dresses to a new level, with jazz. This was Gaga’s way of saying thank you, and it was so full of love, so gracious, heartfelt, and genuine the Rainbow Room practically spun around.

Some of this was filmed to be used in a TV special later this fall. Tony plays Radio City in September and three shows will be taped for use also in the special.

There’s plenty more from the night– politics were definitely on everyone’s minds. Stay tuned for more of that and a couple of scoops. Some things I was told last night on the QT. We’ll see how long that lasts!